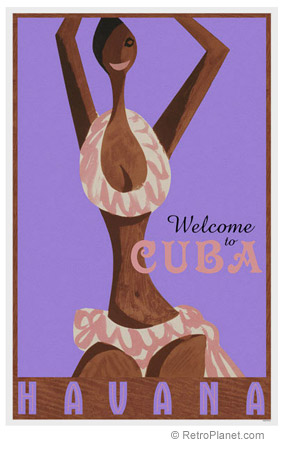 A U.S.-based tour company on Thursday announced the launch of new people-to-people trips to Cuba that would transport U.S. citizens there by ship.

Road Scholar, a Boston-based company, is offering the trips from Jamaica and Miami, with stops in Havana and other parts of Cuba.

Most travel by U.S. citizens to Cuba is outlawed, but tens of thousands of Americans now visit the island legally each year on people-to-people tours, which are licensed by the U.S. Treasury Department. People-to-people trips must have educational and cultural exchange itineraries in order to be approved by the U.S. government.

Typically people-to-people tours fly from U.S. airports to Havana on chartered planes. But Road Scholar’s director of international programs, Yves Marceau, said in a phone interview that “there’s nothing in the regulations or guidelines” that preclude traveling by ship on a people-to-people tour.

The U.S. Treasury Department confirmed in an email that transportation “whether by bus, boat or taxi” in Cuba is permitted as part of the people-to-people programs as long as it does not detract from a “full-time schedule of educational activities that will result in meaningful interaction between the travelers and individuals in Cuba.”

Marceau said Road Scholar had “designed all the port programs to be consistent” with those regulations, including a visit to an agricultural cooperative and meetings with artists.

The Road Scholar trips are among several seaborne voyages planned by U.S.-based entities to Cuba. This fall, Semester at Sea plans its first stop in Cuba since 2004, according to Semester at Sea spokesman Andrew Centofante. Semester at Sea allows college students to earn credit on multi-country study abroad programs that take place on a ship, and Centofante said the Cuba stop was approved by the U.S. government as part of an itinerary in which students will visit various ports around the Atlantic.

The Metropolitan Museum of Art in New York had advertised a people-to-people cruise from Jamaica to Havana this past April, but it did not take place. A spokesman for Academic Arrangements Abroad, which was organizing the museum trip, did not immediately respond to a request for comment, but it’s not unusual for tours sponsored by museums or universities to be cancelled if they don’t get enough participants.

The Road Scholar trip will use a cruise ship operated by a Canadian company, with Canadians and Europeans making up most of the other 1,000 passengers on the ship, Marceau said. The Road Scholar group has room for 24 participants and will adhere to its own itinerary in Cuban ports.

One of the Road Scholar tours is an 11-night trip beginning in Montego Bay, Jamaica, which heads to Punta Frances, located on a small Cuban island south of Havana called Isla de la Juventud, and concludes with five nights in Havana. A second 10-night trip starts in Miami, then heads to Cuba, with stops including rural areas and the western part of the country, and a final stop in Montego Bay. The third Road Scholar voyage runs 12 nights, traveling from Miami to Havana and around the island before returning to Havana. The Road Scholar seaborne trips to Cuba have departure dates in December through March 2014.

For the original report go to http://www.caribbeannewsdigital.com/en/noticia/boston-based-road-scholar-offer-cruises-cuba; For additional coverage go to

For more about Road Scholar, http://www.roadscholar.org

For more about Semester at Sea, http://www.semesteratsea.org