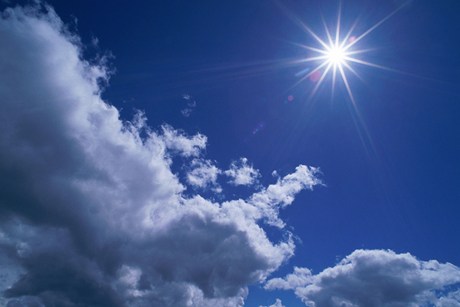 Former U.S. President Bill Clinton met with Governor Alejandro García Padilla in Puerto Rico as part of a push to promote green energy on the island. He pointed out that Puerto Rico has a large-scale solar project in the works, along with a pair of new wind farms, and could very well lead the entire Caribbean toward a green future. [I certainly hope so, because right now it is lagging behind in this respect.] Clinton delivered a speech on energy and climate change at the Puerto Rico Conservatory of Music in Miramar Tuesday afternoon. He said that, as in countries around the Caribbean, high energy costs were crippling economic growth in Puerto Rico. Caribbean Business reports on his speech and developments on the island:

“You clearly in Puerto Rico have a chance to lead the entire Caribbean in a move toward being energy independent,” he said. “You have a chance to set an example to the world in having an energy policy that allows economic growth and environmental responsibility. [. . .] “Whenever an economy has a cost that is glaringly out of line with its competitors, it is a severe constraint on growth,” he said. “If I were planning Puerto Rico’s economic future and wanted to keep the unemployment rate down and stop outmigration of Puerto Ricans and encourage them to come home, I would ask myself, ‘what can I do to increase the economic growth rate here in a way that generates more good jobs?’” he said. “The most obvious answer is to cut the cost of energy.” 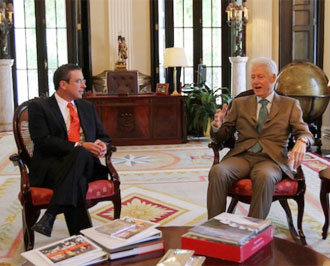 Clinton offered several solutions – suggesting both a “Puerto Rican strategy and a neighborhood strategy and eventually a Caribbean strategy” for energy. That would involve looking to liquefied natural gas and increased solar and wind, the cost of which had fallen dramatically in recent years. “Ultimately, the goal should be to liberate you from any reliance on oil in the generation of your electricity,” he said.

Recent years have seen a growth in green energy projects in Puerto Rico, highlighted by new wind farms in Santa Isabel and Punta Lima and a major solar energy project in Guayama. And Clinton said projects in nearby countries such as Haiti and the Dominican Republic underscored the promise of green energy for the Caribbean.

He specifically mentioned the Mirebalais Teaching Hospital in Haiti, which is entirely powered by solar energy and is the largest solar-powered building in the Caribbean. “Puerto Rico could lead the whole Caribbean away from oil, away from the turbulence that climate change will be and toward a more sustainable economy and a much more affordable one for the people who already live here, already work here and could use a little lower utility bill to invest in other things which will generate more economic growth by far,” he said.

Top photo above from 2012 article on solar energy in PR; see http://www.3news.co.nz/Puerto-Rico-begins-building-large-solar-park/tabid/1160/articleID/275302/Default.aspx

One thought on “Bill Clinton: Puerto Rico Can Lead Caribbean to Energy Independence”