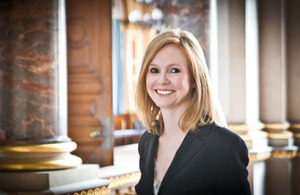 She will be non-resident High Commissioner to Dominica, Grenada, Antigua and Barbuda, St Vincent and the Grenadines, St Lucia, and St Christopher and Nevis, in succession to Mr. Paul Brummell, who will be transferring to another Diplomatic Service appointment. Mrs. Dean will take up her appointment during November 2013.

Mrs. Dean joined the FCO in 2000 and is currently Head of the Europe Directorate Internal. Her FCO career has covered a wide range of roles including working in Washington and in Paris, in the UK’s Permanent Representation to the European Union during the UK’s 2005 Presidency of the EU, and on a wide range of policy issues in London. Mrs. Dean started her career in the health sector as a psychologist before joining the Diplomatic Service.

On her appointment [. . .] Mrs Dean has said: “I am hugely honoured and delighted to be appointed as British High Commissioner. It is a great privilege to have the opportunity to work with Barbados and the countries of the Eastern Caribbean to help achieve our shared objectives. I look forward to working together to strengthen these important relationships even further.”

For more information, see https://www.gov.uk/government/news/change-of-high-commissioner-to-barbados-and-the-eastern-caribbean and UK and Barbados