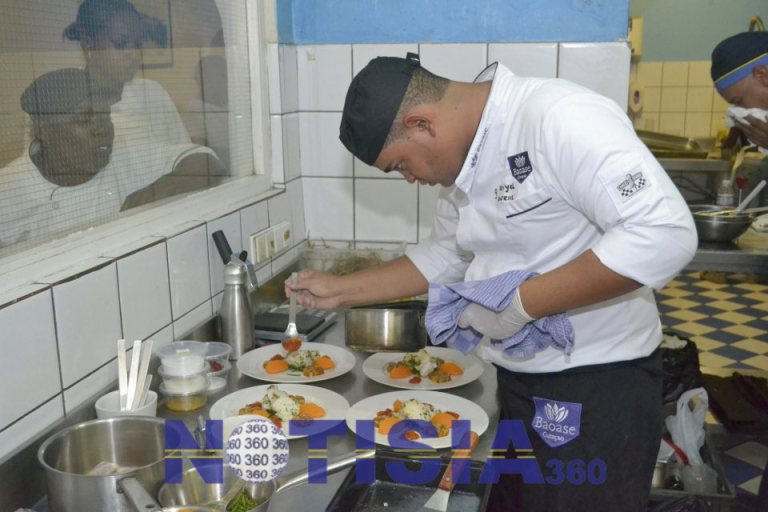 For Adriyel Lourens having won 3 silver medals at the taste of the Caribbean competition is June 2013 is just a step closer to his goal of becoming an international Top Chef, The Curacao Chronicle reports.

Having competed in the taste of the Caribbean competition for the 3rd time, Adriyel started preparing the combination for his signature dish since the beginning of this year. With his specialty being in marinates he aimed at using as much fresh products as possible and made sure that the taste was his strongest asset of his dish. ” After all the taste is the most important aspect of a dish” Adriyel explains.

His Caribbean dish wowed judges in Miami , resulting in 3 Silver medals, which were won while competing against 10 other chefs from neighboring Caribbean Islands. Another achievement which can now be added to this culinary resume.

When asked who his mentor is he does not hesitate to say that Rene Klop, Executive Chef at the Baoase Culinary Beach Restaurant, has been his mentor since 2011.”Rene has many years of experience and has extensive food knowledge. He has taught me how to work with fresh products , which is not common is other hotel restaurants”.

Adriyel has been working at the Baoase Culinary Beach Restaurant for 2 1/2 years now and at the age of 26 has big plans to keep training and gaining experience while working in the state of the art kitchen at Baoase.

When asked what advice he has for up and coming young chefs he says that “Cooking is an art, you should not only want to  do it, but love to do it ! I love cooking and have an amazing passion for food”.

Adriyel can be found expressing his passion for cooking at the Baoase Culinary Beach Restaurant in Curacao.

For the original report go to http://www.curacaochronicle.com/local/adriyel-lourens-chef-of-the-year-curacao-wins-3-silver-medals-at-taste-of-the-caribbean-in-miami/