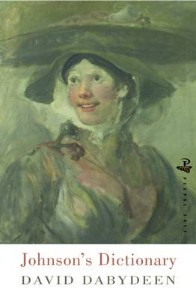 The Society for Caribbean Studies, which held its annual conference at the University of Warwick this past week, held a launch for Davy Dabydeen’s new book, Johnson’s Dictionary.

Manu, a revenant from Dabydeen’s epic poem “Turner”, leads us through 18th century London and Demerara (in British Guiana), recounting experiences that might be dreamed or remembered. We meet slaves, lowly women on the make, lustful overseers, sodomites and pious Jews – characters who have somehow come alive from engravings by Hogarth and others. Hogarth himself turns up as a drunkard official artist in Demerara, from whom the slave Cato steals his skills and discovers a way of remaking his world. The transforming power of words is what enlightens Francis when his kindly (or possibly pederastic) master gifts him a copy of Johnson’s Dictionary, whilst the idiot savant, known as Mmadboy, reveals the uncanny mathematical skills that enable him to beat Adam Smith to the discovery of the laws of capital accumulation – and teach his fellow slaves their true financial worth. From the dens of sexual specialities where the ex-slave Francis conducts a highly popular flagellant mission to cure his clients of their man-love (and preach abolition), to the sugar estates of Demerara, Dabydeen’s novel revels in the connections of Empire, Art, Literature and human desire in ways that are comic, salutary and redemptive.

David Dabydeen was born on a sugar estate in Berbice, Guyana in 1957. His family lived for a time in New Amsterdam where he attended school. He recalls moving back to his family village, Brighton, during the 1964 race riots. At the age of around ten he won a scholarship to Queen’s College in Georgetown where he studied for a couple of years. He was sent to England at the age of twelve in 1969 and was in care until he was sixteen. He won a scholarship to Cambridge University and read English there and at London Universities, completing his doctorate in 1982. He was a post-doctoral fellow at Oxford University for three years. He is currently Professor at the Centre for Caribbean Studies, University of Warwick and was for some years a roving ambassador for Guyana.  His poetry first came to attention in 1978 when poems later published in Slave Song won the Quiller-Couch prize. Slave Song, which was published by Dangaroo in 1984, won the Commonwealth Poetry Prize. In these poems he explores the connections between slavery and indenture, the desire-hate relationship between Black and White and the violence and vitality of Creole.

Slave Song was controversial not least in the fact that the dozen or so poems were each accompanied by an English translation and a detailed commentary. Coolie Odyssey (published by Dangaroo in 1988) is a celebration, albeit a tentative and unsentimental one, of the survival and rooting of a creolised Indian culture in the Caribbean, and Dabydeen’s own exploration of his cultural origins. Turner – New and Selected Poetry (Cape, 1994) and republished by Peepal Tree in 2002, returns to the subject of slavery and restores to the foreground the drowning figure of the slave in JWM Turner’s painting, ‘Slavers’.

His first novel, The Intended (1991) draws both on memories of a Guyanese childhood and of fending for himself in immigrant London before going to Cambridge. Disappearance (1993) is about a Guyanese engineer working on a cliff reclamation project in rural Kent. It is full of intertextual play with Conrad, Wilson Harris and V.S. Naipaul, and investigates the buried centre of Empire deep in England and the ironies of the difficult but hopeful multicultural transformation of British society. The Counting House (1996) is an historical novel set in India and British Guiana in the earliest days of indenture, and deals with the meeting of African and Indian within the corrupting commerce of the sugar plantation. In A Harlot’s Progress (1999) Dabydeen echoes the method of ‘Turner’ by taking the black slave boy from Hogarth’s ‘A Harlot’s Progress’ and inventing a biography for him. As the oldest black man in London, forced on the charity of the abolitionists, Mungo spins a story which in its twists and turns is the one he wants to tell, not the story of victimisation and paternalistic rescue which his ‘benefactors’ want to hear.

In addition to his fiction and poetry, David Dabydeen has written two works of art history, Hogarth’s Blacks: Images of Blacks in Eighteenth Century English Art (Dangaroo, 1987) and Hogarth, Walpole and Commercial Britain (Hansib, 1987) and a critical work, A Reader’s Guide to West Indian and Black British Literature (Hansib, 1988). He is the editor of The Black Presence in English Literature (Manchester University Press, 1985); India in the Caribbean (Hansib, 1987); A Handbook for Teaching Caribbean Literature (Heinemann, 1988); Black Writers in Britain, 1760-1890 (Edinburgh University Press, 1991); Across the Dark Waters: Indian Identity in the Caribbean (MacMillan, 1996).

In 1997, Peepal Tree published The Art of David Dabydeen, ed. Kevin Grant, the first assessment of his work.