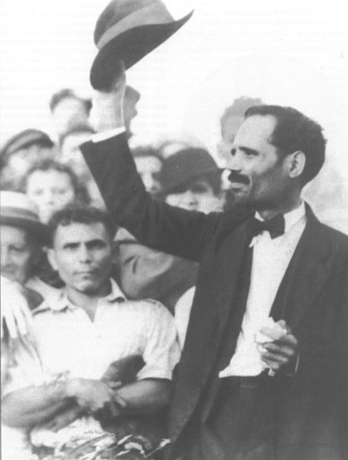 Tonight (July 6, 2013) is the opening of an exhibition—“Albizu: Patriota”—a collective show by 32 Puerto Rican artists in honor of the late Puerto Rican political icon Pedro Albizu Campos. The show opens at 7:00pm at the Conde de Mirasol Fort Museum [Museo del Fuerte Conde de Mirasol] in Vieques. Several of the participating artists will be present at the opening. Free and open to the public, the event will include a variety of musical performances and refreshments.

Pedro Albizu Campos, well-known as the president of the Puerto Rican Nationalist Party from 1930 until his death in 1965, was an attorney, who graduated from the Harvard Law School and returned to the island to become the leading figure in the Puerto Rican independence movement. He spoke six languages and was known for his oratorical skill, which earned him the name of “El Maestro” [The Teacher]. He was imprisoned for 26 years for attempting to overthrow the U.S. government in Puerto Rico. He died in 1965 shortly after his pardon and release from federal prison, sometime after suffering a stroke. There is controversy over his medical treatment in prison, where he claimed that he was the subject of human radiation experiments. The President of the Cuban Cancer Association, Dr. Orlando Damuy, who traveled to Puerto Rico to examine him, concluded that the burns on Albizu’s body were caused by intense radiation. [The U.S. government has since confirmed that human radiation experiments had been conducted on some prisoners from the 1950s through the 1970s.]

See photo of Albizu above and article on Puerto Rican art by Pedro Vélez at http://www.artnet.com/magazineus/reviews/velez/velez2-21-07.asp