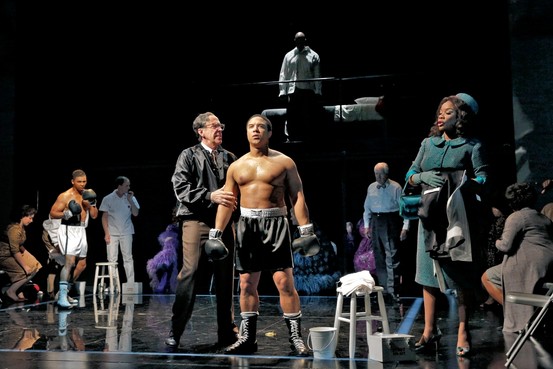 Terence Blanchard’s first opera, “Champion,” is an ambitious work, both for its music and its contemporary theme—as Heidi Waleson writes in this review for The Wall Street Journal.

Mr. Blanchard, renowned as a jazz trumpeter and a composer of movie and Broadway scores, teamed up with playwright and filmmaker Michael Cristofer to tell the story of Emile Griffith, the Caribbean-born champion boxer who, in a notorious 1962 televised fight, beat his opponent, Benny “Kid” Paret, into a coma; Paret died 10 days later. “Champion,” which was given its world premiere by Opera Theatre of Saint Louis earlier this month, uses jazz, opera and musical theater elements to explore the life of a man perpetually at odds with himself. A closeted homosexual and not naturally aggressive (he would rather make hats), the eager young immigrant is pushed into a world that is all about machismo, and becomes haunted by the man he killed.

Division and unease permeate the work. Three Emiles coexist and interact: Emile, elderly and suffering from dementia (Arthur Woodley, a poignant, shambling presence), looks back on the life of Young Emile (the mesmerizing young baritone Aubrey Allicock) and Little Emile (the affecting Jordan Jones, age 10). The jazz-inflected numbers, particularly the ensembles, grab your attention and underline the jittery, disturbing nature of Emile’s inner conflict. Insistent rhythmic patterns and repeated, overlapping lines of text are skillfully deployed to create joyful chaos (the Caribbean carnival that sends the buoyant Young Emile off on his adventures) or the hectoring crowds of voices that later beleaguer and confuse him.

Mr. Blanchard’s straight-out solo lyrical writing is blander and less interesting; Young Emile’s anthem “What makes a man a man?” channeled “The Impossible Dream” and has less punch than the older Emile haltingly intoning “This is my shoe. My shoe goes where?” The composer’s text-setting, however, is accomplished: The vocal lines enhance the rhythmic undercurrent of Mr. Christofer’s clipped, sometimes rhyming, profanity-laced libretto.

The jazz quality of repetition with embellishment extends successfully into the dramaturgy. Lines and motifs recur throughout the work, as when Emile struggles to dress and to remember what happened to him. Big numbers alternate with meditative ones; a Ring Announcer (Christopher Hutchinson) calls the “rounds” and the opera comes full circle as the old Emile meets Paret’s adult son and finally finds peace.

Director James Robinson and set designer Allen Moyer have created a fluid, lively production, switching effortlessly between eras with the aid of Greg Emetaz’s video and projections, James Schuette’s costumes (including some elaborate drag queens), and Christopher Akerlind’s lighting. All three Emiles are splendid. As Emelda, Emile’s manipulative mother, Denyce Graves’s weighty mezzo sounds overvibratoed and inflexible in the fast-moving passages of Act I, but she delivers in Act II with a haunting aria, accompanied only by plucked string bass, about her painful past. Victor Ryan Robertson’s high, piercing tenor is ideal for the taunting Paret. Robert Orth makes Howie Albert, Emile’s trainer, pushy but compassionate; mezzo Meredith Arwady has a playful number as Kathy Hagan, owner of a gay bar where Emile seeks companionship. George Manahan, the adept conductor, knows when to let the jazz trio embedded in the orchestra take the rhythmic lead.

One thought on “Opera: A Heavy Weight to Bear”