At the Arsenale, as part of the 55th Venice Biennale, there is a space curated by Cindy Sherman that includes six Vodou flags. Here is a brief description from the catalog’s introduction:

At the center of the Arsenale, is a curatorial project by Cindy Sherman – an imaginary museum of her own devising in which dolls, puppets, mannequins, and idols cohabit with photos, paintings, sculptures, votive offerings, and drawings by prison inmates, composing an anatomical theater in which to contemplate the role of images in the representation and perception of the self. The word “image” is linked, by its very etymology, to the body and its mortality: the Latin imago referred to the wax mask the Romans made to preserve the likeness of the recently deceased. 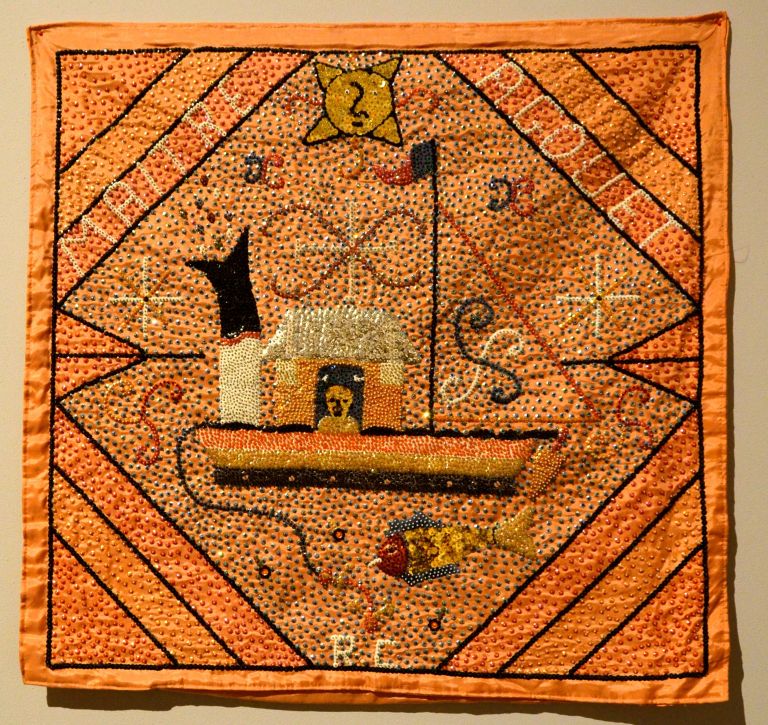 The following explanatory text (somewhat problematic) accompanies the flag exhibit:
Like many aspects of Caribbean culture, Vodou has deep roots in Africa, but has annexed and transformed a number of other cosmologies and traditions as it has evolved over the course of centuries. Many deities in the Haitian Vodou pantheon correspond directly to African precedents; their characters have been elaborated and ate red over time through amalgamation with Amerindian and European divinities, particularly the saints of the Catholic Church. In addition, revolutionary generals, reborn Haitian statesmen, and ancestral spirits (known in Haitian Vodou as loa) populate Lavilokan, the mythological city of spirits.

Vodou ceremonies open with parades of richly decorated banners, whose glittering sequins entice the spirits to enter the temple and possess devotees. The tradition of creating flags or banners flourished under the colonial occupation of Africa, where it allowed for the articulation of syncretic, empowered identities using a mixture of African and European symbols; in the New World, similar flags assumed important roles in Brazilian carnival, as well as in a variety of religious rites throughout Caribbean culture.

Nearly all Haitian Vodou practitioners use flags, or drape, which represent gods or spirits using iconography derived from depictions of Catholic saints. Masonic symbols, and maritime lore–in addition to the ritual designs called véve, which are also believed to function as beacons for the loa. Each loa has a specific set of characteristic attributes: daggers, decks of playing cards, rainbows, birds, boats, a pair of glasses with one lens missing. Dambala, the creator god, is the loa most commonly represented with snakes; as the master of the sky, Sambala controls the life-giving force of rain and is associated with fertility and wisdom. Dambala and the other loa can be invoked to help and to offer counsel, providing immediate  guidance and comfort to believers. Like the human beings who conjure them, however, the loa are also given to rage, lasciviousness, and jealousy. Erzulie Freda, whose vévé ash the shape of a heart, flirts with all men but considers all women to be her enemies. 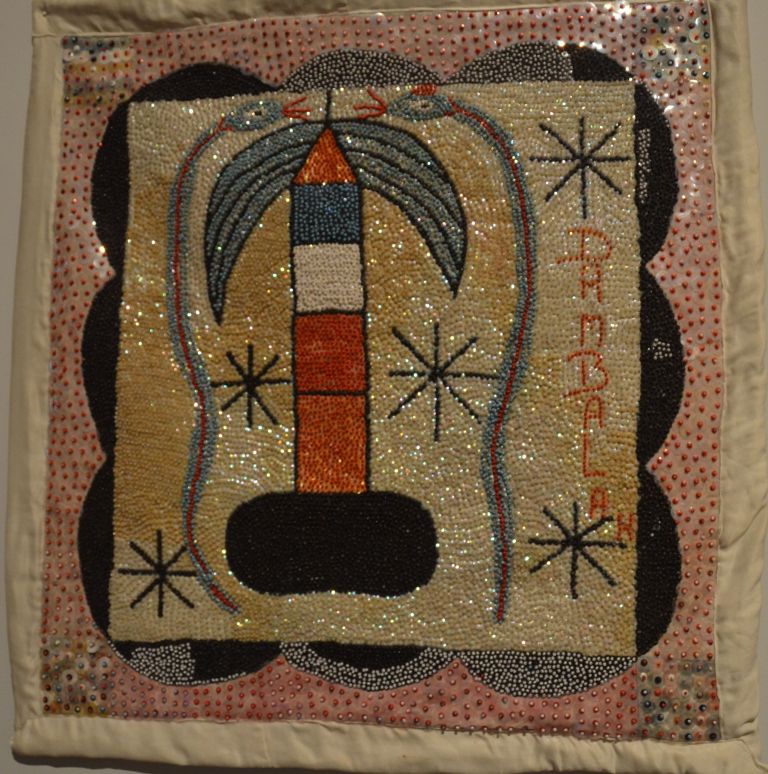 The flags exhibited are attributed to Clotaire Bazille (Erzulie), Ronald Clerisier (Agouet) and Ti-Bute (Gason). The artists responsible for the other flags are listed as unknown.