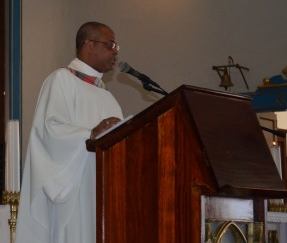 Dozens of parishioners gathered outside a Roman Catholic Church Sunday to support a parish priest who has been accused of molesting a girl nearly two decades ago. Catholics in Dominica’s Grand Bay held cardboard placards saying “Our parish priest has to stay” and chanting their support for Monsignor Reginald Lafleur, who they referred to as “Father Reggie.”

The 59-year-old priest was put on administrative leave after a woman alleged that he touched her inappropriately on her “bottom and breast” and made “sweet eyes” at her 19 years ago when she was a 12-year-old parishioner. The woman made the accusations against Lafleur in a series of letters to Bishop Gabriel Malzaire, the head of Dominica’s diocese.

Malzaire has sent the accuser to the Caribbean country of Trinidad & Tobago for counseling as a local church panel investigates her allegations. He has not stated publicly why he decided to send her for counseling in Trinidad. In one of her letters to Malzaire, the woman wrote, “I need money and it seems that I am being ignored.”

On Sunday, members of a church committee insisted Lafleur was innocent of the accusations and met privately with the bishop, who performed the morning Mass at the Grand Bay church to mostly empty pews. Most of the parishioners remained outside, milling about and holding placards. Edward Registe, a member of the local church committee, told the crowd of protesters that Malzaire had said the investigation into the accusations against the parish priest would take another month at least. The demonstrators chanted, “We want Father Reggie back now!”

The Catholic Church has struggled to deal with sex abuse by its priests. A global scandal of Catholic clergy abuse erupted in 2002 after thousands of cases became public in the United States and elsewhere around the world.

One thought on “Dominica Catholics Vow Support for Accused Priest”