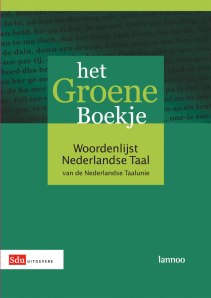 The NOS (public broadcasting foundation of the Netherlands) reports that words of Curaçaoan, Surinamese and other (Dutch) Caribbean origin that are used in the Dutch language will be added to the next edition of the ‘Groene Boekje’ [Little Green Book] which is due to appear in the Netherlands in 2015. The ‘Groene Boekje’ is the popular name of the Dutch Language Glossary that provides an overview of the official spelling of Dutch words for use in government and education as defined in the Spelling Act. It is published by the Dutch Language Union, an intergovernmental association through which the Netherlands, Belgium and the former colonies of the Netherlands in the Caribbean cooperate on matters pertaining to the Dutch language. The NOS mentions the following examples of Caribbean Dutch words that could appear in the upcoming edition of the ‘Groene Boekje’:

·     faderen [to annoy, to become fed up] – a verb with a Papiamentu base but given a typical Dutch inflection;

For the original article (in Dutch), see http://nos.nl/artikel/516448-dushi-in-het-nieuwe-groene-boekje.html.