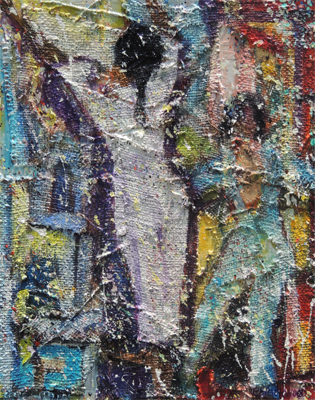 The Big Apple was aglow on Monday night as rarely seen A-listers, intellectuals, socialites, art collectors and grass roots art lovers converged on Manhattan’s East Side for the opening of Journey – a 30-year retrospective of Jamaican art. On show were the works of Jamaicans from Whitehouse, Westmoreland – Courtney Morgan and Paul Blackwood—as Dave Rodney reports in this article for The Gleaner. [The works pictures here are by Paul Blackwood.]

More than 100 mesmerisingly beautiful pieces in oil on canvas, acrylic, burlap on canvas, and an array of unusual collages, were on display at the Jamaican Consulate in New York. Specially invited guests had an opportunity to make early claims on their favourite works. 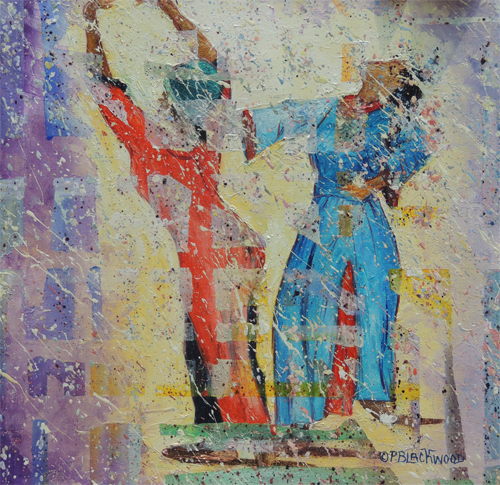 “The huge turnout this evening is evidence that art is alive, well and flourishing in New York City,” a beaming Paul Blackwood told Today. His long-time mentor and relative Courtney Morgan agreed. “A few years ago, this was not the case, as art had taken a nose dive with the economy. So I am thrilled to see this hefty resurgence. Journey runs for a week and coincides with Caribbean Week in New York, organised by the Caribbean Tourism Organisation. The exhibition was declared officially open by Sharon Burrell Green, deputy consul general of Jamaica in New York. She congratulated the artists on their amazing journey, growing from self-taught artists on Trafalgar Road in St Andrew to becoming the creators of sought-after treasures, works that are now permanently domiciled in the private collections of princes and presidents.

“I am happy that I bought Morgan and Blackwood’s works two decades ago, and I urge my friends to buy now as the prices are unlikely to diminish in the future,” marketing executive Noel Mignott told the packed audience.

For the original report go to http://jamaica-gleaner.com/gleaner/20130607/social/social2.html