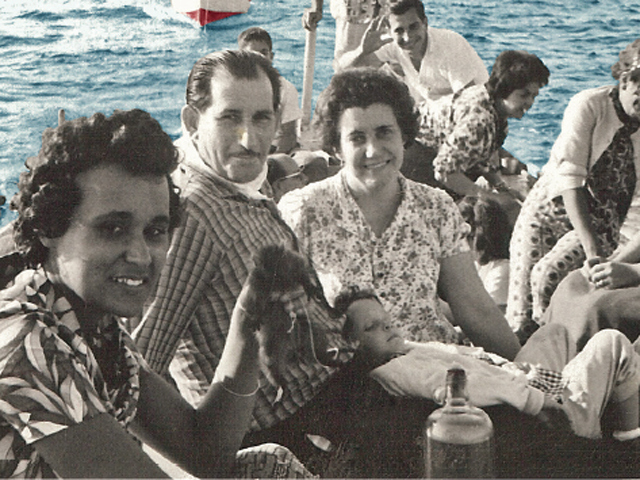 An article by Kristina Puga for NBCLatino.

“Be Careful! The Sharks Will Eat You!” is not only the name of Jay Alvarez’ one-hour one-man-show, it’s also what his parents used to tell him when he was nearly five years old and on a boat with his family emigrating to the U.S. from Cuba.

“The title of the show is part of that memory,” says the actor, almost five decades later. “Whenever I hear the sound of searching for a radio station, or the sound of waves lapping on the shore, it always transports me to a different place.”

On June 6, he hopes to transport his fellow Americans on a trip down his memory lane — back to what it means to be Cuban and American. He’s donating all proceeds towards a benefit for the American Latino Museum campaign taking place in New York City at El Museo del Barrio.

“I fell in love with the whole story,” says Estuardo Rodriguez, director of the American Latino Museum campaign, about the Alvarez family. “It really tells the story of the immigrant experience and achieving that American Dream.”

The idea for an American Latino Museum was sparked in 2005, and in 2008, the American Latino Museum Commission Act was approved, and Rodriguez was part of the team who created a non-profit for the campaign. Although interest in the museum has skyrocketed on social media, with more than 128,000 likes currently on Facebook, and 142,000 followers on Twitter, Rodriguez says more advocacy needs to be done to create this partly federally funded museum. Friends of the National Museum of the American Latino still have yet to raise a significant portion of their $300 million target.

“It’s going to take a little more legwork, and there’s competing interests and priorities as the budget fight is gearing up again,” says Rodriguez. “We are going to be competing for some attention, but the environment is much friendlier…We want to have all our cosponsors lined up by July and get on the calendar by the end of the year.”

With significant Latino presence in all aspects of American life, from the military to NASA, Rodriguez says the stories and exhibits are already there. It’s a matter of bringing them together.

One of those stories is that of the Alvarez family, which Jay Alvarez has immortalized by writing the play “Be Careful! The Sharks Will Eat You!”

“It is based on a two-hour recording my nephew did of my father before he passed away,” says Alvarez. “I was missing him, and I listened to my father’s recording in a park one day. I started to write about the conversations I thought he might have with my mother, or the people on the boat.”

He says the story sat in his computer for two years before he felt a calling to produce it. He’s been touring the country with his props — two chairs — for the past three years.

“It’s been an incredible joy,” says Alvarez. “I didn’t anticipate it touching people the way it has.”

He especially remembers a German immigrant whom he chatted with after his show in Washington. She gave him a piece of the Berlin Wall, as a symbol for peace everywhere, which he says he safeguards until this day.

“Everyone takes their own thing away,” says Alvarez about his play. “I think the Anglo community forgets what people do to come here. They risk their lives to come here. It’s a huge huge risk for their lives.”

Alvarez says it would be nice when the play closes for people to think, “You can’t send them back after all that,” and for ethnic communities to realize that becoming American and coming to this country doesn’t take away your culture — you can be both. For himself, writing his family’s story has made him admire his father even more.

“I’ve come to appreciate his incredible strength and courage to jump in the ocean in the middle of the night,” says Alvarez. “He taught me you’ve gotta take the risk, jump in, and focus. Many years ago, he and my mother and I were in the car — I was an adult — and he said to me, ‘How long are you going to be an actor?’ and I said, ‘It’s because of you I’ve learned to take a risk,’ and he joked, ‘Oh great, it’s my fault he’s an actor.’”

All jokes aside, Alvarez is thankful his dad risked their lives for a better life in America. He says his father has given him the inspiration and opportunity to make this life-changing play for himself and others.

“It’s not a comedy, but it has funny moments like life does,” says Alvarez. “Although it’s a Cuban story, it’s really more universal — it’s an American story.”

For the original report go to http://nbclatino.com/2013/06/04/one-immigrant-story-to-raise-funds-for-the-american-latino-museum/