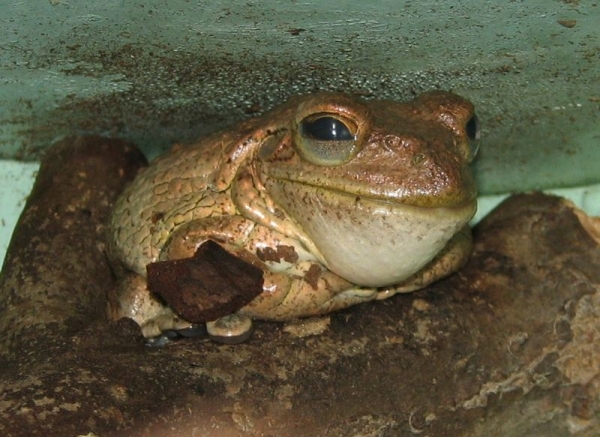 The loud croaking of the Cuban tree frog (Osteopilus septentrionalis) can disrupt communication of other frogs in the area, a new study has found. Cuban tree frogs are an invasive species in Florida and have threatened the native frog population ever since their arrival during the 1920s, as natureworldnews.com reports.

The Cuban Tree frog is native to Cuba, the Cayman Islands and the Bahamas, and was accidently brought to the U.S. during the 1920s. The frogs can now be found in Florida, where they are considered an “invasive species”, mostly because they kill native frogs and other insects. These frogs grow very large in size and are known to cause power outages by short-circuiting utility switches.

The present study was conducted by Jennifer Tennessen, a graduate student at The Pennsylvania State University, and her colleagues who recorded the calls of these frogs. The researchers then looked at the effects of these calls on the behavior of other frog species found in Florida – green tree frogs, and pine woods tree frogs. The acoustic signature of the green tree frog is similar to the Cuban tree frog, while the acoustic signature of the pine woods tree frog is completely different.

“We predicted that Cuban tree frog chorusing would interfere most with native tree frogs whose acoustic behaviors were similar,” Tennessen said in a news release, “and that these would be the most likely candidates to modify their acoustic behavior to avoid interference.”

Researchers found that when the controlled recordings of the croaking of Cuban tree frog were played, the green tree frog doubled the number of calls per minute – the call rate. However, there was no such change in the call rate of the pine woods tree frog.

“By increasing their call rate, green tree frogs may be able to increase the likelihood that potential mates can detect them amidst the noise. This response, however, likely comes at the cost of requiring additional energy, which could be detrimental as it may divert energy away from other important functions like digestion and immune function,” Tennessen said. Also, the noise made by the green tree frog may increase its chance of being spotted by predators.

Tennessen added that the loud noise might be “impairing the communication of a variety of different species — from frogs and toads to birds and insects — that rely on sound for survival and reproduction.”

The study was presented at the 21st International Congress on Acoustics (ICA 2013).

For the original report go to http://www.natureworldnews.com/articles/2196/20130531/cuban-tree-frogs-croaking-disturbs-animals-study.htm