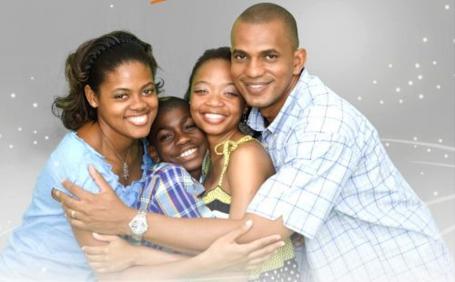 A NEW Caribbean sitcom will make history next week, when it becomes the first Bajan series to be shown on UK television, as Davina Hamilton reports for the UK’s The Voice.

Keeping Up With The Joneses is a popular series from Barbados and will launch on The Africa Channel next Monday (May 13.)

The sitcom follows the Jones family, who reluctantly become the subjects of a reality show called Life & Times in the Caribbean. It requires that a camera crew follow the family around and film their every move.

Irving, the patriarch of the family, signs the contract to do the show against his wife Angela’s wishes. Now, the couple and their two children – 17-year-old daughter Tracy and 10-year-old son Nathan – have to co-exist, while looking good for the cameras, which results in embarrassing encounters and hilariously awkward TV moments.

Keeping Up With The Joneses attracted record audiences when it was aired by the Caribbean Broadcasting Corporation channel in 2011 and 2012, and became hugely popular in Barbados.

All 15 30-minute episodes will now air on The Africa Channel, bringing Caribbean flavour to UK screens.

Keeping Up With The Joneses will air daily from May 13 on The Africa Channel, Sky channel 209 and Virgin channel 828. Visit www.theafricachannel.co.uk

For the original report go to http://www.voice-online.co.uk/article/bajan-sitcom-hit-uk-screens