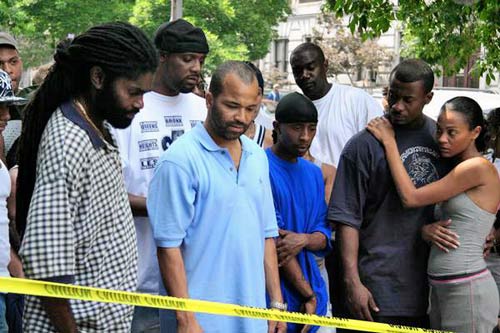 In “Haitians on the big screen,” Caribbean Life speaks about the highlights of the second edition of the Haiti Film Fest, which is produced by Haiti Cultural Exchange and will be held May 9-12, 2013, in Brooklyn Heights. During two full days—May 11 and 12—an amazing line-up of films will be screened free of charge at St. Francis College, 180 Remsen Street from noon to 10:00pm. May 9 is the gala fundraiser featuring Haitian singer Emeline Michel, honoring filmmaker and archivist Frantz Voltaire. The event will take place at Drom, 85 Avenue A in the East Village, New York. Caribbean Life describes the festival:

This year’s festival reflects the immense intelligence and efforts of film selection from the 1981 “Anita,” Rassoul Labuchin’s hard-to-find classic, to the 2006 John L’Ecuyer’s infrequently seen narrative, “On the Verge of a Fever/Le Goût des Jeunes Filles”– based on Dany Laferriere’s book of same name, to more recent releases like Guetty Felin’s post-earthquake documentary “Broken Stones.” A film short precedes the feature films.

Among the NY Premieres at the festival, “Twa Timoun” (Three Children) by Jonas d’Adesky will screen May 11 at 6:00 p.m. The film follows three best friends, (one haunted by memories as a restavek, obsessed by the idea of freedom), all impacted by the earthquake, which throws them into the streets. Kendy Vérilus’ music documentary “Zafè Fatra” imaginatively tackles an important and rarely addressed issue– Port-au-Prince’s garbage–in the NY Premiere of his eight-minute film at noon, May 11. This film is paired with “Port-au-Prince, Ma Ville” by Rigoberto Lopez that highlights the capital’s problems along with a focus on its key role in history. The film released in 2000 is also a cinematic archive of a pre-quake Port-au-Prince.

If you missed the narratives “Woch Nan Soley/Stones in the Sun” by Patricia Benoit or Jimmy Jean-Louis starring in “Toussaint Louverture” directed by Philippe Niang at the African Film Fest, here’s a chance to see them. “Woch” screens May 12, 1:00 p.m., and the three-hour “Toussaint” close the festival on May 12. Following each set of films, a Q&A will take place and most of the filmmakers will be present.

The curatorial team from Haiti Cultural Exchange, co-chairs filmmakers Michele Stevenson and David Belle–also, founder of Cine Institute in Haiti, and an advisory committee of other filmmakers and industry professionals can be credited with this year’s pick of fresh (including the ‘older’ ones) and dynamic films.

[. . .] New York is a film town, but by now, it has dozens and dozens of film festivals. When co-chair Michele Stevenson was asked: Why a Haitian film festival? Hers was a thoughtful response; “The New York area has the largest Haitian community in the country. With the success of HCX’s first festival (in November 2011) it was clear there’s a hunger for images of the Haitian community, for stories in their complexity. It’s important to see ourselves represented in a variety of ways.”

[Photo above from “Blackout.”]