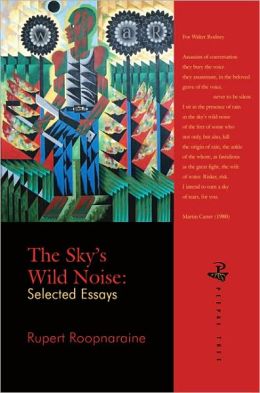 Jeremy Poynting (managing editor of Peepal Tree Press) gives his impressions of recent developments in the Caribbean literary world, including activities at the Bocas Litfest, and the CaribLit launch, among others, in Stabroek News. See link with full article below:

We came to Guyana after four days at the Bocas Litfest in Trinidad and Tobago. There, Rupert Roopnaraine and Ian McDonald were Guyana’s direct representatives, and it was a delight to meet up again with Cyril Dabydeen, Guyana via Canada, after many years. [. . .] Ian McDonald was interviewed by Nicholas Laughlin and read from his new collection of poems, The Comfort of All Things. His was a very warmly received presence, not just for the beautiful new poems, but for sharing the accumulation of a lifetime’s wisdom that has an immense generosity of spirit at its heart. Many people told us that they thought that Rupert Roopnaraine’s The Sky’s Wild Noise, winner of the non-fiction prize, would win the overall OCM Bocas prize. It didn’t, but Rupert got one of the biggest cheers of the festival when he spoke about coming from the Guyana budget debates where words were used to wound and divide, to the nourishment of the festival where words were used to enrich and unite. Kendel Hippolyte’s Fault Lines, the other finalist as winner of the prize for poetry, was also published by Peepal Tree. The overall prize was won by Monique Roffey’s novel Archipelago.

For me, the outstanding feature of the festival, beyond the quality of the writers brought to it and the huge efficiency of the organisation, is that it is a genuinely pan-Caribbean festival with writers from all parts of the region. [. . .] One of the festival highlights was the launch of Trinidadian Barbara Jenkins’ first book, her collection of stories, Sic Transit Wagon.

[. . .]  One of the important and very well attended sessions was the CaribLit launch. This important initiative, funded by the Commonwealth Writers Prize and the British Council, recognises that writers based in the Caribbean region are at a significant disadvantage compared to their compeers in the North American and British diasporas with regard to access to publishing and infrastructures of support such as writer-development programmes. CaribLit is the outcome of meetings at last year’s Bocas that brought together writers, publishers, festival organisers and literary activists in the Caribbean Literature Action Group (CALAG). [. . .]

One of my concerns arising out of the CaribbeanLit initiative is that Guyana seems somewhat off the regional map, and I’m committed to seeing what can be done to remedy this situation. My feeling is that support for writers, publication and literature in general works best when it operates at arm’s length from government, whatever its political persuasion. [. . .] Praise is due to the Guyana government for allocating funding to literature and the arts, but I think that it ought to be possible to set up an independent funding body of respected individuals who represent all sectors of Guyanese society, to develop and model institutional practices that ensure transparency in the allocation of public funds, with stringent requirements for bidding for, reporting and accounting of the use made of those funds.

[. . .] We came to Guyana to do two things, as well as to reacquaint with a country I’ve been visiting since 1976. We came to launch Rupert Roopnaraine’s The Sky’s Wild Noise at the Moray House Trust in association with Lloyd Austin’s bookshop, and to run a workshop for writers at Moray House. [. . .] What’s impressive about Austin’s holdings of Caribbean literature is that it ranges across the region, whilst too many Trinidadian or Jamaican booksellers tend to be more narrowly island-centric. [. . .]

2 thoughts on “From Trinidad to Guyana: Jeremy Poynting Speaks about the Bocas Lit Fest”