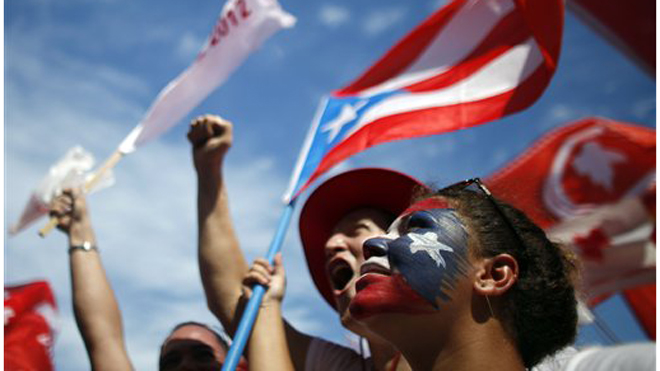 Performers such as Ricky Martin and Calle 13 stand in support of Enidris Siurano Rodriguez, a 15-year-old Puerto Rican student who was chastised by her school for refusing to stand for the Pledge of Allegiance. Here is the full story from Fox News Latino:

Enidris Siurano Rodriguez, a sophomore at Damascus High School in Montgomery County in Maryland, has protested U.S. policy on Puerto Rico since she was in seventh grade by silently sitting during the daily Pledge of Allegiance. “I do not agree with the way the United States treats Puerto Rico… I think Puerto Rico has an undemocratic situation, I dislike the idea that a government so far [from the island] tells us what we can and cannot do,” she told the leading Puerto Rican daily newspaper, El Nuevo Día.

I do not agree with the way the United States treats Puerto Rico… I think Puerto Rico has an undemocratic situation, I dislike the idea that a government so far [from the island] tells us what we can and cannot do. Earlier this month, Rodriguez said she was asked to stand by a teacher and complied under duress before being called to the principal’s office to discuss the matter. According to Rodriguez, administrators dismissed her protest and belittled her ethnic background. The next day, the girl claimed, she was told to stand for the Pledge of Allegiance, but she refused – and was confronted by a different teacher who took issue with her protest. Then the American Civil Liberties Union became involved, arguing the girl’s civil rights were violated.

The ACLU sent a letter to the school board, saying the actions such as a teacher complaining that Rodriguez’s actions were an insult to the military and military families are against the law. Montgomery County Public Schools spokesman Dana Tofig told Fox News Latino in a statement that the school board received the ACLU’s letter and is looking into the matter. He clarified district policy on the Pledge of Allegiance. “Our regulations are very clear — students should not and cannot be compelled to participate in patriotic exercises, such as the Pledge of Allegiance,” Tofig wrote. “If a staff member does try to compel a student to participate or punishes a student for not participating, that is unacceptable.” Yet that’s exactly what Rodriguez said she was forced to do — forced to participate. So she contacted the ACLU.

David Rocah, a staff attorney for ACLU of Maryland, told Fox News Latino that after the letter was sent, the Damascus High School principal personally apologized to Rodriguez and her parents. “I told her I hope when my daughter is in high school she is independent, thoughtful and as courageous as Enidris is,” Rocah said.

The incident has made Rodriguez a sort of mini-celebrity – especially after famous singers pointed to her case as a cause célèbre. “The right to free speech also includes the right not to speak. Too often this is forgotten #SolidarioConEnidris,” Puerto Rican sensation Ricky Martin tweeted recently. Calle 13, the Puerto Rican reggaetón group, also took to Twitter, urging their thousands of followers to check out the case and lend support to Rodriguez.

4 thoughts on “Puerto Rican Teen Refuses To Pledge Allegiance to the U.S. Flag”