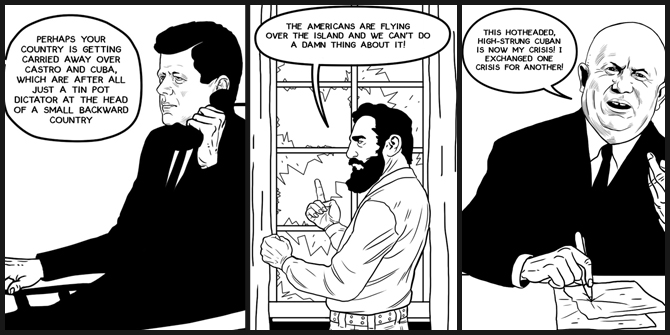 The JFK Library and Museum in Boston has a new exhibit that tells the story of the Cuban missile crisis through once-secret White House recordings and documents, the Associated Press reports.

It opened Friday after an earlier debut at the National Archives in Washington.

It depicts President John F. Kennedy and his advisers in deliberations as the United States and Soviet Union were in a nuclear standoff during 13 days in October 1962.

Listening stations with tapes of Kennedy’s National Security Council meetings are the centerpiece.

A recreated fallout shelter and one of the first aerial reconnaissance photos of Soviet missile sites under construction in Cuba are also part of the presentation.

There are also personality studies that the Central Intelligence Agency did on Soviet Premier Nikita Khrushchev and Cuban leader Fidel Castro.

For the original report go to http://bostonherald.com/entertainment/arts_culture/2013/04/jfk_library_opens_exhibit_on_cuban_missile_crisis