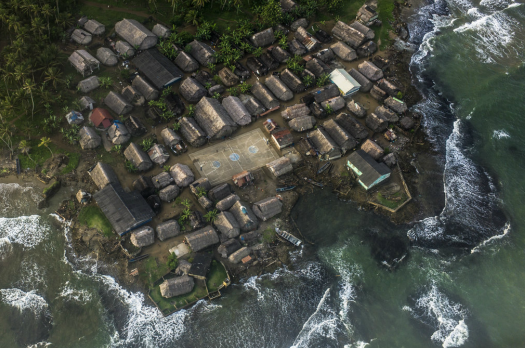 This article by WHITNEY RICHARDSON appeared in The New York Times’ photography blog. Follow the link below for an extensive photographic gallery.

For thousands of years on the Kuna Yala islands, water and prayer were intertwined with daily rituals.

The Kuna — a group of roughly 40,000 indigenous people living on dozens of islands off Panama’s Caribbean coast — were isolated, relying on the land and one another to sustain their communities. Most of the local fishermen spend their days coasting the sun-drenched waters in hand-carved dugout canoes, looking for lobsters and fish to sell at the local market.

In the evenings, they gather for several hours in “congreso,” a nightly meeting led by the community spiritual leader, where they worship and recite traditional songs. The lyrics are steeped in myths and metaphors acknowledging their ancestors and giving praise to their land.

But for the past several years, the congresos have taken a dark tone. After abnormally high tides hit the coast in 2008, hundreds of the Kuna were forced to move inland when their homes were destroyed by knee-deep floodwaters. According to studies by the Smithsonian Tropical Research Institute, since 1910 the average sea level in Kuna Yala has risen by almost six inches, and is continuing to increase by roughly three-quarters of an inch annually. Many of the Kuna are beginning to fear that in the near future, their land will be completely submerged.

Now when the Kuna pray to their gods, they mostly ask for protection to preserve their way of life.

“From the outside looking in, it looks like a very peaceful living paradise,” said Matthieu Rytz, who has been photographing the islands, with the support of Neus Photos since 2011. “The women are dressed in molas, their traditional dress. Everything looks so calm. But the Kuna have a lot of problems they are trying to address. There are many things that the tourists don’t see.”

It was during a boat trip from Panama to Colombia that Mr. Rytz first came across the Kuna Yala islands. He had been studying anthropology at the University of Montreal and was immediately drawn to how the Kuna showed reverence for their ancient traditions to maintain the land.

“It was literally like traveling through time,” Mr. Rytz, 32, said.

Originally from Switzerland, Mr. Rytz said he has always been interested in understanding how different cultures are formed and how people are influenced by their surroundings. In 2009, he founded Anthropographia, a nonprofit organization that promotes art and photography focused on human rights issues. When he reached the Kuna islands and noticed the flooding, he wanted to explore how these challenges could change their future.

But for Mr. Rytz, photographing them was no simple task.

After a bloody rebellion against Panama in 1925, the Kuna claimed their independence and became an autonomous Indian community — with complete control over the use of their land. Originally from what is now Colombia, the Kuna occupy nearly 40 of the 350 islands between Central and South America and have fought for many years against development and mining activities that could disrupt their resources.

Most islands have no electricity and are powered by oil-fueled generators brought in by Colombian merchants. Kuna leaders have also strictly regulated tourism, limiting hotel construction to only a few of the main islands as well as charging tourists a small fee for interacting with residents.

Immediately after Mr. Rytz began taking pictures of the Kuna islands, he was told by several spiritual leaders that he would need a permit for each individual island he wanted to document. Without their permission or a spiritual blessing, he could face a $500 fine.

“It wasn’t an easy process and it became frustrating at times,” Mr. Rytz said. “The Kuna are very big on protecting their image and maintaining a certain level of control over their people. Sometimes, they didn’t even care to hear what I was trying to do with my photographs. I was told to leave the island right away.”

After getting his permits, he returned in 2012 and traveled with several local guides.

On each island, he watched how the Kuna spent most of their days working together to collect garbage, corals and sand to create makeshift barriers along their homes, only for the waters to wash away their efforts in a matter of hours.

“The majority of the people think the island is disappearing, they speak about it a lot,” he said. “So they are putting these blockers up by the sea. They don’t have engineers. They don’t have concrete or cement. Instead they use garbage. Without proper understanding on how to build bags, they do whatever they think will work.”

He quietly joined in on a few congresos, where the Kuna sang spiritual songs and asked for better days to come. Then there were the debates on how to handle the Colombian drug trafficking trade surrounding their islands, which sometimes results in bags of cocaine drifting to their shores. (They eventually decided that any money made from a Kuna selling drugs found off the coast would go back to improving the community.)

At one point, one of his guides brought home a large flat-screen television that he received from a traveling merchant after trading several small bags of cocaine he found while fishing for lobsters. Mr. Rytz watched as the man proudly carried the television into his home, propping it up against a small branch to keep it away from the sandy floor.

When he realized he didn’t know how to turn it on, he turned to Mr. Rytz for help.

“I had to explain to him that he needed electricity to make this television work,” he chuckled. “There are no outlets in the middle of the sea.”

For the original report go to http://lens.blogs.nytimes.com/2013/03/26/the-eroding-culture-of-kuna-yala/