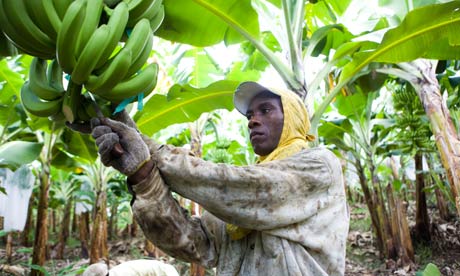 As the banana industry continues to shift and create tensions globally, here is a short article on how the Dominican Republic fares in the agricultural market:

In 2012, the Dominican Republic exported about 300,000 tonnes of banana to countries of the European Union, making it their main supplier. This is an estimate made by Ekaterina Krivonos from the Trading and Markets Division of the United Nations Organization for Food and Agriculture (FAO).

Last week, as she participated in the “Towards the development of a sustainable strategy of the Dominican Republic’s banana market” workshop, she said that the Dominican Republic’s participation in the export market for this item is quite important for a small country. In her lecture titled “The current situation in the global banana market”, she stated that, compared to 2010, global exports of the crop increased by 7.7% in 2011.

During the meeting that is part of the United Nations Programme, “Strengthening the banana value chain through the growth of inclusive markets” and which brought together producers and exporters, Krivonos mentioned that 80% of world exports come from Latin America and the Caribbean. In 2000, the Dominican Republic only exported 50 thousand tons of bananas to the EU, she said.

According to Gero Vaagt, FAO’s representative in the country, the Dominican Republic’s banana sector is not very strong; it has a low productivity and producer’s associations, which is why he suggested better coordination and cooperation between banana producers.