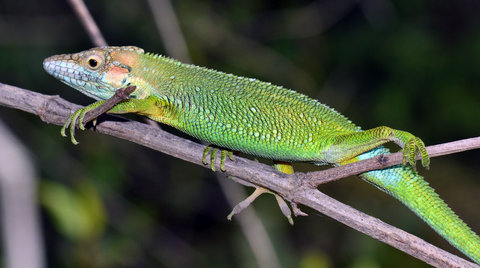 This article by Jonathan Losos appeared in The New York Times.

Jonathan Losos, professor and curator of herpetology at Harvard’s Museum of Comparative Zoology, writes from Colombia, where he is studying the biodiversity of anole lizards, an evolutionarily successful group that has produced 400 species throughout Central and South America and the Caribbean islands. For more on anoles, see anoleannals.org.

Whether it was the slightly better weather, a good night’s sleep, or our improving searching skills, I don’t know, but our second day in the field was a vast improvement over the first. We located 15 lizards — nearly four times our first day’s catch. And our success continued in subsequent days, so that by week’s end we had collected data on 42 individuals.

As a result, we’ve been able to learn a lot about the natural history of the variable-scaled anole (Anolis heterodermus). Now we know where it occurs in the habitat, how it moves, and what it eats. Most importantly, we’ve been able to test our idea that this Colombian species is very similar to habitat specialists on Caribbean islands.

Almost nothing has been published in the scientific literature about the variable-scaled anole. Nonetheless, from the scant records and our examination of specimens in natural history museum collections, we had formulated the hypothesis that the variable-scaled anole is ecologically and behaviorally similar to the twig-using anole species that have evolved independently on each of the large islands of the Caribbean.

Twig anoles, as their name implies, are generally found on narrow woody surfaces. Their slender bodies and short tails and legs allow them to navigate narrow and irregular surfaces with ease. But the adaptations come at a cost — twig anoles are slower than molasses. What they don’t have in quickness, however, they make up for in cover. Twig anoles generally are well camouflaged and they search out immobile prey, moving slowly along narrow branches, twigs, and vines.

Our examination of the lizards confirms that they have convergently evolved many of the characteristics of Caribbean twig species, especially the shape of their head, their large and heterogeneously-sized scales, and, of course, their short legs. But they are not dead-ringers. Their tails are too long and they are green, whereas twig anoles are usually some shade of grey. Small differences aside, the big question is whether this convergent morphological evolution translates into similar behavior.

And the answer is a resounding yes.

In true twig anole fashion, the variable-scaled anole was almost always found on very narrow branches and vines: 97 percent were first noted on surfaces less than one inch in diameter. And, like twig anoles, they are incredibly slow moving, almost never running or jumping, or even walking. Rather, they lift one green foot at a time, moving at an almost imperceptible pace. These lizards are masters of stealth, but they have one further trick up their scaly sleeves — when it is windy, they coordinate their movements with gusts of wind, so that they are moving at the same time as the vegetation around them, making their movements inconspicuous.

Though our field data were confirmatory, we wanted to test the twig anole hypothesis in one additional way: biomechanical convergence. The big heads and short legs of Caribbean twig anoles confer great biting ability, but poor sprinting performance. Is the same true in the variable-scaled anole?

To find out, one member of our team, the French researcher Anthony Herrel, conducted a sort of lizard Olympics back at our field quarters. First, in the 1-meter dash, the lizards were placed on a long, straight branch. A tap to the tail substituted for the starter gun and the lizards would take off at top speed — sometimes with further tail-tapping encouragement — until they reached the other end. Like any good sporting event, a slow-motion video replay is involved, in this case to determine just how fast they ran. After testing each lizard three times, with an hour’s rest between each race, we then moved to the iron-man competition. But in this case it could be called an iron-tooth competition. To determine how hard they can bite, each lizard was induced to chomp onto a sophisticated force sensor that can calculate the force generated by their jaws. This is easier than it sounds, because when handled, these lizards often open their mouths and will latch onto anything that comes within biting range.

Once again, the variable-scaled anole showed that it belongs in the twig anole pantheon. Their legs may be slow, but their jaws are another matter. Their big heads and large muscles can pack quite a wallop. A male measuring three and a half inches can bite as hard as a small cat. I actually wasn’t surprised when Anthony reported that finding, having already discovered as much while capturing a lizard earlier in the day.

We have learned a lot about the habits of this little known reptile after only a week in the field. We also now know that, at least in this case, a mainland species of anole has evolved in very similar ways to its Caribbean habitat counterparts. Nonetheless, there is much left to discover. The climate here is very different from that of the Caribbean. How does this high-altitude lizard cope? The variable-scaled anole also shows much more variation in its color: some green lizards have black patches on the side or a blue tail, and other lizards—in the same population—are not green at all. Why?

For the original report go to http://scientistatwork.blogs.nytimes.com/2013/03/19/lizard-olympics/