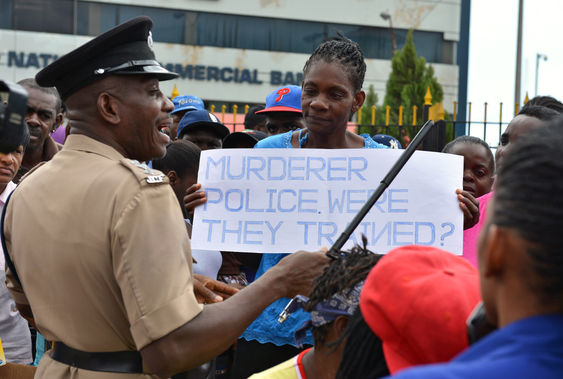 Residents of a battle-scarred slum once controlled by Jamaica’s biggest underworld boss rallied Wednesday to demand accountability and justice for a deadly 2010 raid into their community that failed to catch him.

Roughly 80 demonstrators marched from a central square to Prime Minister Portia Simpson Miller’s offices. Most were from Tivoli Gardens, a public housing complex in West Kingston once run by drug kingpin Christopher “Dudus” Coke where at least 73 civilians were killed when security forces conducted an offensive during a state of emergency.

When the protesters arrived at the prime minister’s offices, a handful of organizers and Tivoli Garden residents were permitted inside the gates to deliver to an official a written petition calling for an “international inquiry” into the raid.

Organizer Lloyd DAguilar, with the Tivoli Committee and the Campaign for Social and Economic Justice, said the demonstrators wanted a response from Simpson Miller within 30 days.

Hannah Harris-Barrington, a British-Jamaican lawyer representing Tivoli residents, said she hoped to involve the United Nations and international courts because of what she called “a major cover-up” being perpetrated in Jamaica.

“People are dead, people are missing,” she said into a bullhorn during a rally. “We need action; we need international attention now because otherwise this is going to happen again.”

Basic details of the raid remain murky, though it was one of the bloodiest episodes in Jamaica’s recent history and there have been numerous claims of unlawful killings. Journalists were kept out during the operation.

Leaders of Jamaica’s security forces have said their men came under heavy fire from inside the slum, but residents dispute that and very few weapons were recovered.

The police say the corpses of 73 civilians were recovered in West Kingston. But former Prime Minister Edward Seaga, who built the Tivoli Gardens complex in the 1960s and is still revered by residents of the politicized slum, has estimated that as many as 150 people were killed. Three members of security forces were killed during the unrest.

“They take them right out of my hands and kill them,” Williams said softly, holding a placard reading “Murderer police — were they trained?”

Marjorie Hines, a 40-year-old mother of six whose partner Mickey Freeman was killed in the raid, said she “lost everything” during the violence, including her ability to hold down a job. She pointed at numerous scars on her arms, face and elsewhere that she said were inflicted when the military fired mortar shells into the complex.

“The treat us like dogs. But we are human beings!” Hines shouted.

Last year, the Jamaica Defense Force acknowledged that its troops used mortar fire to break through heavy barricades that Coke’s supporters had erected to block entry to the slum. Previously, military officials had said they didn’t know anything about explosions that numerous residents described as bombs.

Days before soldiers and police raided Tivoli Gardens, gangsters traveled to the housing complex in a show of support for Coke. The boss of the notorious Shower Posse gang was captured elsewhere in Jamaica a month after the raid and extradited to New York, where he was sentenced to 23 years in prison for drug trafficking.

The office of Jamaica’s public defender has not delivered an overdue report on the bloody operation. Public Defender Earl Witter has blamed a staff shortage as among the reasons why the report is unfinished. Besides the reports of unwarranted killings by police and soldiers, more than 1,000 complaints have alleged rights violations by security forces.

Amnesty International has said an independent commission of inquiry with a broad mandate and powers is the best way to shed light on the deadly raids.

For the original report go to http://www.therepublic.com/view/story/3dab1c4d3fc543749baf7c0d3a253a8e/CB–Jamaica-Slum-Standoff