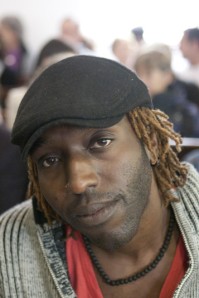 The National Gallery of Jamaica Blog brings the perspective of Jamaican writer Kei Miller on the National Biennial 2012. In these excerpts, Miller comments on walking through the biennial, exposing oneself to layers of exploration, and works by artists such as Ebony G. Patterson, O’Neil Lawrence, and Laura Facey. To read more, see link below:

[. . .] Perhaps I have taken Susan Sontag’s warning to heart – that to talk about art is too often an act of trying to interpret it – to give it a meaning. Of course at this year’s biennial, much of the work is full of rigorous intellectual content, but nothing that I would call ‘meaning’. This word ‘meaning’ suggests a neat and sometimes too-tidy conclusion, while I suspect our best Jamaican artists are more interested and drawn to the many and messy layers of exploration that precede such flat finalities.

I am grateful that Ebony G. Patterson has not yet concluded her fascinating exploration of not-quite-male/not-quite-female bodies. And the work does not seem anxious for conclusion. The bodies she represents seem to move both robotically and gracefully across a much wider spectrum of gender than we tend to imagine let alone acknowledge. What might start out as masculine in Ebony’s work can easily end up feminine; what might start out effeminate can end up butch. But more interesting than these binaries are the many other points along the spectrum; Ebony’s bodies pause at and perform many other genders – genders that have not yet been named by language. ‘Masculinity’ for instance, seems to be a plural thing in Ebony’s work and so embraces the effeminate man, not as someone whose behaviour is antithetical to manliness, but rather as a possible and authentic version of it. The dainty flowers that hang in her video installation this year end up not only contrasting but also perfectly complimenting the soft beauty of her men.

When I step out from the tropical, slightly magical cave she has created, back into the bright lights of the gallery – I am not conscious of anything so simple or smug as a conclusions, only of a fascinating journey.

[. . .] In another work – this time by O’Neil Lawrence – what I am struck by is not its meaning, but its evocative strength, the way it draws on an archetypal theme and so resonates with many of us who have had to escape the large shadows of our parents. In Lawrence’s portrait the father figure looms large, but in the background; it is a geographic placement that makes the figure simultaneously overpowering and distant, present and shadowy.

[. . .] In a piece as striking as Laura Facey’s Radiant Red, meaning did not factor into how I enjoyed and was humbled by the work. If there was meaning in Radiant Red, I didn’t detect it, and this, Facey’s work contrasts with her other installation – her scattering of phalluses, so rich in myth and symbolism. The mounted combs however, seem, to gain draw on another kind of power, an energy that comes from their composition, the juxtaposition of the two blocks of wood, the cleanness of the craft, the blocking of the colours, the oddity as well as the simplicity of the final piece.

But all of these are words I am adding after the fact. The first time I walked through the biennial, I walked around without language, simply nodding and feeling overwhelmed by the ways our artists see and reflect upon and trouble the world we live in.

One thought on “Kei Miller: Languages beyond Meaning”