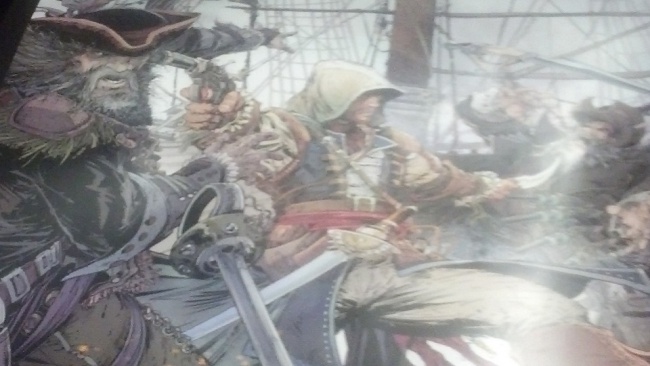 Ya’harr, this ship, it be leaky—Rory Young reports o te video game rumors in this article for neoseeker.com. I know some of you are probably looking at this asking WTH, but for some os us this is exciting news.

When we first heard Assassin’s Creed would be coming to the Caribbean, you can understand we’d be skeptical. Sure, it would allow Ubisoft to really fully utilize their ship captaining features and tech, but with the wider gaming community screaming Brazil, Japan and elsewhere… the Caribbean? Introducing Assassin’s Creed IV: Black Flag, essentially confirmed via a leaked poster  (Kotaku) and a blurry screenshot (Examiner) with LENS FLARE.

According to the anonymous tipsters, posters will be going up at retailers starting on March 4, which likely implies an official announcement later this week. So if you want to feel boss, wander into your local GameStop and ask to preorder Assassin’s Creed IV and when they ask, “How do you know about that?” just whisper you’ve got friends on the inside.

I don’t even need to think about this, a pirate-themed Assassin’s Creed title sound absolutely exciting. I’m a big fan of swashbuckling, buccaneers and grag. Since I’ve already completed the Three Trials to become I pirate, I believe I’m well prepared for Assassin’s Creed IV: Black Flag. Perfect move for the franchise, I believe, and I can’t wait to see everything Ubisoft has cooked up soon.

You know what would be better? Lady pirate protagonist.

For the original report go to http://www.neoseeker.com/news/22301-rumor-assassins-creed-iv-black-flag-leak-confirms-caribbean-location-its-a-pirates-life-for-me/