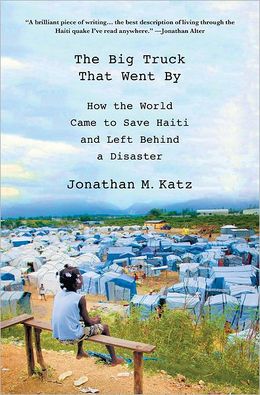 The author will speak about his book on Thursday, February 21, at 7:00pm, at Carmichael’s Bookstore, in his hometown, Louisville. The bookstore is located at 2720 Frankfort Avenue in Louisville, Kentucky.

Description: Laurent Dubois—author of Haiti: The Aftershocks of History—writes: “Beautifully-written, brave, and riveting, The Big Truck That Went By tells the devastating story of the post-earthquake reconstruction effort in Haiti. Weaving together his personal experiences with the knowledge gained from his intensive investigative report, Katz offers us an autopsy of a global relief effort gone wrong. But the book also offers us a moving portrait of the courage, humor, and vision of the Haitians he worked with, offering a glimpse of the possibilities for a different future. Anyone seeking to understand Haiti’s current situation, as well as the broader impasses of our current model of aid, should read this book.”

Jonathan M. Katz, a Northwestern University, is a former Associated Press correspondent and editor. The only full-time American news correspondent stationed in Haiti during the January 2010 earthquake, he stayed on to cover the aftermath and flawed recovery that followed. That fall, he broke the story that UN peacekeepers were the likely cause of a postquake cholera epidemic that killed thousands of people. Katz was awarded the 2010 Medill Medal for Courage in Journalism and the 2012 J. Anthony Lukas Work-In-Progress Award for ‘The Big Truck That Went By.’ Other recognition has included a National Headliners Award and finalist recognition by the Livingston Award and Michael Kelly Award for the “fearless pursuit and expression of truth.” In seven years with AP, Katz also reported from China, Mexico, the Dominican Republic, the West Bank, the United States, and elsewhere. You can find him on Twitter, @KatzOnEarth.

2 thoughts on “New Book—“The Big Truck That Went By: How the World Came to Save Haiti and Left Behind a Disaster””