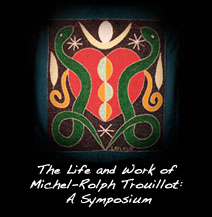 New York University’s Center for Latin American and Caribbean Studies (CLACS) presents “The Life and Work of Michel-Rolph Trouillot: A Symposium,” co-organized by Aisha Khan (Department of Anthropology), Katherine Smith (2012-2015 Fellow, CLACS), and Jill Lane (Director, CLACS). The symposium, celebrating a major body of work that continues to influence scholarship in the humanities and social sciences, takes place on Friday, March 1, 2013, from 9:00am until 7:30pm at the Auditorium of King Juan Carlos I of Spain Center (KJCC), located at 53 Washington Square South, NYU, New York, New York.

Description: Haitian academic and anthropologist Michel-Rolph Trouillot, who died this past year, left a major body of work that has shaped the study of the Caribbean and the Atlantic World. His analytical point of departure was the experience and conduct of power. Trouillot’s interest in methodologies of ethnography and theory-building, memory and historiography, and the relationship between poetics and empiricism ranged from the micro-level of Caribbean peasantries to the macro-level of globalization.

*Photo ID is required for entry into the building.

For more on the work of Michel-Rolph Trouillot, see http://blog.aaanet.org/2012/07/16/in-memoriam-michel-rolph-trouillot/

2 thoughts on “A Symposium: The Life and Work of Michel-Rolph Trouillot”