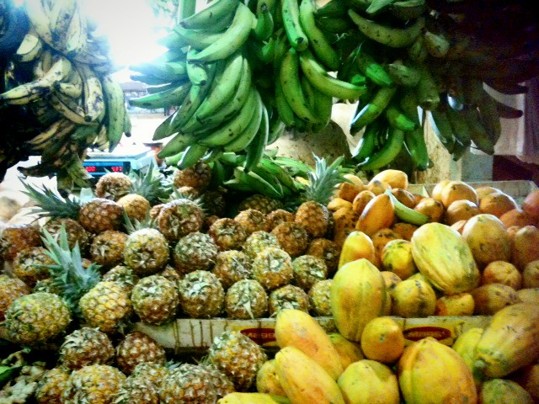 In “Puerto Rican Food, beyond Rice and Beans,” Stacey Hocheiser Fox (The Washington Post) writes, “Puerto Rico has been undergoing something of a restaurant renaissance.” I thought this article provides a good follow-up to our previous post Gastro-Nomics: Hunting for a Good Meal in Puerto Rico, in which Selena Simmons-Duffin laments the difficulties in finding good, fresh food in Puerto Rico.

It seems like an unlikely place to go for a salad: a warehouse in the middle of car repair shops on a San Juan side street, where few tourists venture. But this warehouse is the home of El Departamento de la Comida — the Department of Food — an organic produce vendor that doubles as a restaurant serving dishes such as rice pilaf with squash and tortilla española with plantains and cilantro. [. . .] Healthy fare is plentiful in most major U.S. cities. But it’s still hard to come by in Puerto Rico, where the majority of restaurants still serve the familiar staples of rice, beans, fried plantains and some kind of meat, usually chicken or pork, often fried and sometimes on a stick. Vegetables, if they even make it to the plate, are also often fried and may come from Costco. But things are definitely changing in the U.S. island territory. Puerto Rico has been undergoing something of a restaurant renaissance, with a handful of eateries adopting elements of the local food movement that has flourished on the mainland.

Fortunately, the best new places are not as out-of-the-way as her warehouse [El Departamento de la Comida] in Santurce. But they’re not exactly easy to find, either. A popular San Juan restaurant called Jose Enrique, which specializes in big plates of fish suffused with tropical flavors, has no sign in front of the residential space it occupies a block from the Plaza Mercado farmers market; Verde Mesa, a vegetarian restaurant, is on a quiet back street of colonial Old San Juan; Abracadabra, a lively cafe, is in a neighborhood that hasn’t quite lost its sketchiness despite several new apartment buildings and shops.

One thing that these and several other relatively new entrants into the market have in common is a more sophisticated approach to the island’s cuisine, said Giovanna Huyke, executive chef at Mio restaurant in Washington and the author of two books on Puerto Rican food culture.  For many years, chefs on the island were either European or at least trained in that style and their cooking reflected it, Huyke said. This started to change in the 1980s, as a younger generation emerged and incorporated flavors of home such as sofrito, a mix of onions, cubanella and sweet chile peppers, a cilantro variety known as ricao [sic; recao], and garlic, as well as some of the island’s traditional fruits and vegetables, including yuca, malanga, yautia, apio, batatas and breadfruit.

[. . .] Puerto Rico, with a population of about 4 million, has more than 7,000 restaurants, including many of the chains found on the U.S. mainland. [. . .] For the past five years, the Puerto Rico Hotel and Tourism Association has organized an annual food festival called Saborea at Escambron, a beach between Old San Juan and Condado. The event, on April 6-7 this year, will feature the work of chefs from 60 restaurants. It drew nearly 8,000 people last year. The dishes one finds in Saborea have evolved over time, along with the local restaurant scene, says Clarisa Jimenez, president of the Puerto Rico Hotel and Tourism Association. Though there are still plenty of old standbys, including the fritters stuffed with ground meat known as alcapurrias, there are chefs displaying more sophisticated dishes. “Cuisine has more importance now, more relevance,” Jimenez said.

Few local restaurants, and perhaps none, have embraced the farm-to-table ethos to the extent of Verde Mesa, which overlooks San Juan Bay and the city’s cruise ship port.

[The article goes on to list other foodie favorites in Puerto Rico:]

Experts in the island’s restaurant scene have a pretty short list of favorites, with many names appearing again and again. They include Abracadabra Counter Cafe, which opened in 2010 on the long and busy Ponce de Leon Avenue and features wraps and fresh juices, along with live music at night and events for kids.

Pure and Natural has been around for several years, offering healthy Caribbean food and fruit shakes. It’s on Ashford Avenue, in the heart of the touristy Condado, but it’s easy to miss the storefront amid the surrounding fast-food joints.

Also among the favorites is Bodega Chic, a blend of French-Algerian and Caribbean cuisine; its dimly lit spot is just up the cobblestone street from the cathedral in Old San Juan.

Outside the old city, there is La Jaquita Baya, serving tapas such as small fish tacos and bok choy as well as more traditional Creole dishes. There is also Pikayo, which for many years was inside the Puerto Rico Museum of Art but has moved to the Conrad Condado Plaza Hotel. It’s considered another of the more ambitious restaurants; chef Wilo Benet has a book on Puerto Rican cuisine and a TV show.

Outside San Juan, the choices are much narrower. On Vieques, the former U.S. Navy bombing range that now attracts thousands of visitors each year to some of the best beaches in the Caribbean, there’s a restaurant called Next Course, which serves appetizers such as yellowfin tuna tartare with tempura avocado and yucca chips and, for a main course, butter-poached Caribbean lobster with white-truffle-scented crab risotto.

Over on the west coast, there’s the surfer town of Rincon, where Copa Llena offers up green papaya salad and grilled octopus on a bed of white beans with incredible flavors and freshness.

4 thoughts on “Puerto Rican Food, beyond Rice and Beans”