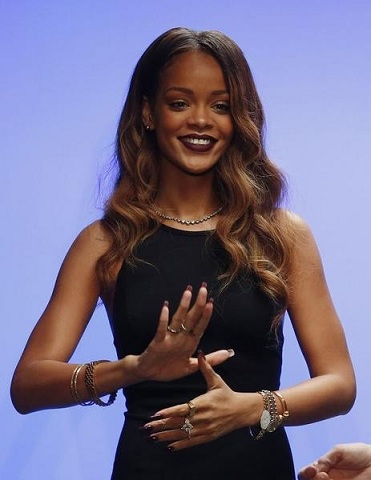 London Fashion Week 2013 started out with a debut fashion collection—Rihanna for River Island—by the Barbadian pop diva. The singer has already sported the innovative collection, which will hit stores on March 5. According to iDT (International Design Times), Rihanna has said that “launching at London Fashion Week is a dream come true for me. I have wanted to design my own collection for a long time and to present my collection for River Island alongside all of the other great design talent at LFW is a real privilege. I can’t wait to see the reaction from my fans and the fashion press!”

No one went to Rihanna’s Saturday night debut as a fashion designer expecting demure dresses set off with tasteful pearls. So no one was surprised by the double-volume hip-hop music, smoke machines and champagne that greeted guests at the unveiling of her Rihanna for River Island collection. And few were taken aback by the bad girl, rock chick styling of some of her clothes, with tight-fitting jersey outfits and dresses cut to show more than a bit of leg. It was a fun, flattering collection aimed at young women, containing nothing shocking or outrageous from a singer who has been known to bring those elements to her live performances.

Much of the buzz Saturday was about Rihanna’s first-even fashion collection. Many of her outfits had a simple, monochrome look—in off-reds, yellow, navy, black and other colors—and they were cut to look good on those blessed with a fit physique. Rihanna also tried her hand at a few elegant, semi-sheer dresses that were predominantly black with white floral patterns. The singer appeared unusually shy but happy in her brief appearance on the catwalk to take in the audience’s applause. She wore a short black dress as she waved to her fans.