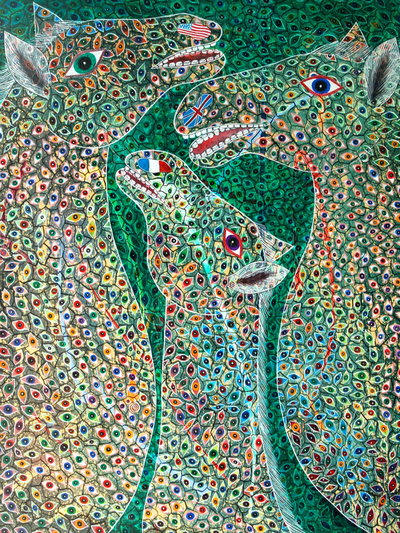 Some are self taught. Others, extensively schooled. Some use traditional tools. Others, glitter.

The works of some of Haiti’s top contemporary artists — who come from a variety of backgrounds and employ many forms of media — are now on display at the Stonehenge-Luce Non-Profit Annex, located 1159 Second Ave.

The 52 works — all up for sale — will stay on display until Feb. 18 and can be viewed from 9:30 a.m. until 7:30 p.m., said Raynald Leconte, CEO of the Haitian Cultural Foundation and the show’s co-organizer.

Some of the pop-up exhibition’s highlights include Frantz Zephirin, a painter whose work appeared on a New Yorker cover, Leconte said.

Mario Benjamin, another artist with three works on display at the space, is one of the most in-demand contemporary-style Haitian artists, Leconte said.

“He creates work based upon what he feels,” he added. “You see these faces that have different levels.”

One painter even uses beads and glitter in his work, alongside paper and fabric, Leconte said.

Several prominent flagmakers also have works included in the showcase.

“In Haiti, flags are used because they are elements of spiritualism, of the energy of the island,” the co-orgainzer explained.

For Leconte, the point of the exhibition is to foster an understanding of Haiti’s aesthetic history.

“The show really talks about the national treasures of Haiti, and they’re not to be forgotten. These artists are not Haitian firsts — they are artists first,” he said.

“It represents a segment of society in Haiti that is very creative that continues to make beautiful work. I think people need to start collecting again Haitian art — not because it’s charity, because it’s art. We’re not looking for handouts.”

The paintings above are by Frantz Zephirin.

For the original report go to http://www.dnainfo.com/new-york/20130215/upper-east-side/contemporary-haitian-art-hits-upper-east-side#ixzz2Kyq4p7qJ