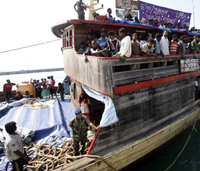 The UN’s refugee agency—United Nations High Commissioner for Refugees—has reiterated concern about persons in need of international protection and fear of deportation in Caribbean waters. The agency calls for all countries in the Caribbean region, and the United States, to screen all individuals intercepted at sea to determine whether they have a fear of persecution, or other protection concerns, before they are returned to their countries of origin. The Bahamas Weekly reports:

In the first two months of 2013, there has been a dramatic rise in the number of boats, particularly from Haiti, transporting individuals in Caribbean waters. [. . .] Since the beginning of the year, at least 217 Haitian and Cuban nationals have been intercepted in Caribbean waters. There have been interception reports off the coasts of Puerto Rico, Jamaica, The Bahamas, and the Cayman Islands. UNHCR is urging the governments of Jamaica and The Bahamas to refrain from returning any Cuban or Haitian nationals scheduled to be deported this week without individual screening.

“Elementary considerations of humanity and the fact that many countries in the region are granting asylum to Haitian and Cuban nationals when applying on land, demonstrates the absolute need for these basic procedural safeguards to be applied at sea,” said Vincent Cochetel, UNHCR’s Regional Representative in Washington.

UNHCR has repeatedly urged all countries involved in interdiction, and rescue at sea, operations to put in place screening procedures to ensure protection for refugees and asylum-seekers of all nationalities caught in mixed migration flows. The agency stands ready to provide support to the states confronted by these maritime movements to ensure that all individuals intercepted or rescued at sea are properly screened in accordance with international human rights principles.