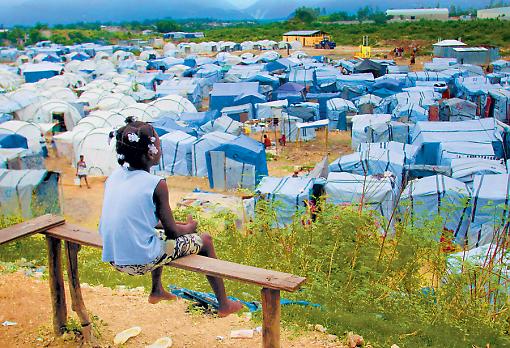 The American journalist speaks to The New Statesman’s Charlotte Simmonds about Haiti, his new book, and why the earthquake relief effort has failed.

On January 12, 2010 a 7.0 magnitude earthquake struck fifteen miles outside Port-au-Prince, the capital of the poorest nation in the Western Hemisphere. It levelled the city. Poorly constructed buildings made of over-stretched concrete collapsed en-masse, claiming hundreds of thousands of lives. Months later, an outbreak of Cholera claimed thousands more.

Former AP correspondent Jonathan Katz was the only American journalist in Haiti when the earthquake hit. He had lived in the country for two and a half years, and stayed on throughout the reconstruction efforts.

Over  $10 billion was pledges to Haiti in an outpouring of relief funds and private donations. So why, three years on, is Haiti no better off? “Nearly a million are still homeless…rubble, some mixed with human remains, still chokes much of the city. At last count, more than half the reconstruction money that was supposed to be delivered as of 2011 remains an unfulfilled promise,” writes Katz in the introduction to his new book, The Big Truck That Went By: How the World Came to Save Haiti and Left Behind a Disaster. Misspent aid money, reneged pledges, lack of funds given directly to the Haitian government, cultural misunderstandings and corrupt self-interest are just a few of the issues that allowed the effort to fail, Katz argues.

I wanted to write this book to understand how a massive humanitarian effort, led by the most powerful nation in the world – my country – could cause so much harm and heartache in another that wanted its help so badly.

People remember the Haiti earthquake as both an unimaginable disaster and a milestone humanitarian effort. Your thesis is that the relief effort failed – and in some ways became a disaster itself. Why did things turned out this way?

Things haven’t gone well because the same mistakes that were made before the earthquake, the mistakes that made the earthquake so destructive, were repeated after the earthquake. It was a transformative disaster that, in addition to disfiguring the landscape of Haiti and Port-au-Prince, was also an opportunity to do aid differently, and to recast the relationship between Haiti and the international community – particularly the United States, France and Canada. And that opportunity was lost. We seem so entrenched in our attitudes and our ways of doing things that even despite the enormity of this disaster we were unable to change.

The tone of your book so much pessimistic as desperate. You write that you initially believed Hillary Clinton when she pledged to ‘do things differently’ and resist ‘falling back on old habits’, which of course didn’t happen. Was the relief effort incapable or just lazy?

Change is hard. Change is always hard, especially any change that asks you to hold yourself accountable for people for whom you were not previously accountable. Here’s one way of putting it: to do aid differently asks us to fundamentally alter our understanding of who we are and what we are capable of. Part of that is realizing we’re not always a force for good. Aid and disaster response is often looked upon as a gift: “we didn’t have to help, but you’re in need so I’m going to save you.”

And you’re saying that’s a problem, because there is a presumption that whoever plays the ‘savior’ role inherently knows what’s best?

Right. It’s the attitude of a parent to a child. When you read the pamphlets from USAID and various other development agencies, they will use a broadly philosophical, almost novelistic language. But what I’m trying to show is that this has not been a relationship of unalloyed good. It has also been a relationship of unalloyed evil. There are plenty of people who will tear your ear of about how the United States has tried to screw Haiti up from the beginning – and I don’t think that’s accurate – but we do have to understand that we’ve been affecting Haiti for a long time with our trade and immigration policies. So it’s not a question of whether we should be involved; it’s a question of how we should be involved. To use poker terms: we are pot committed.

You write about people losing interesting in the Haitian plight a few months after the earthquake. How do you maintain the public’s interest in a reconstruction effort once they’ve donated their money?

It’s a good question. When talking about a poor country in crisis, there’s this idea of the commodity of attention: that if we can only pay attention things will get better, and if things are getting worse it’s because we have withheld our attention.

But attention is not always good. Celebrities are big on attention, it’s what they do, going to a country to ‘raise awareness’. I’m not saying that’s bad, but attention in-and-of itself doesn’t mean anything, especially in the way that it is often meted out to Haiti. Celebrities and sportsmen come to raise awareness by pointing out a hungry child with a pot belly and saying “it’s so sad but there’s still hope, so please give money to UNICEF”. And then they leave and they’ve done nothing. All they’ve done is perpetuate a stereotype about a Haitian child and called for the perpetuation of a political, industrialized kind of aid.

If people care enough to be reading my book or travelling to Haiti, they need to use their contributions in a smarter way. You can’t save everybody, but focus your attention on one thing you care about and understand it as deeply as you can. That will ultimately go a lot farther. And get rid of the industrialized savior complex.

After living in a disaster zone, would you say the ‘savior complex’ is a dynamic perpetuated only by foreigners, or is it more nuanced than that?

It’s absolutely true that it’s more complicated than we often assume. In America the debate often takes on the same shape as the debate on welfare in Britain. The conversation about Haiti has the same tone of ‘dependency’ and ‘laziness’, because Haitians often do look at any white person that comes to their country as a purveyor of aid. But it doesn’t mean that they’re waiting for our largess. They’re working very hard and trying to manage their lives.

Every reporter will go to Haiti and see so much activity – streets full of people selling and trading and trying to make money any way they can. It is insane to think you’re looking at a place that we report as 40-70% unemployment. There’s a word in Haitian Creole, dégagé, which basically translates as “muddling through” or “hustling”, every hour of every day just to get by. The aid industrialized countries give to Haiti is part of dégagé, you as a foreigner are part of dégagé, but we’re not the whole thing. Haitians are capable of taking care of themselves, they just need the tools. Dignity is one of the most important things in Haitian life. Go to any tent camp, even if it’s absolute squalor and the latrines are overflowing, people will walk past you with their clothes all coordinated. They may just have one dress and one ribbon but by god they’re going to work it.

You reveal that much of the aid money went to investing in the Haitian garment industry. Was this just another ‘quick fix’ that fits our Western model of what a developing job market should be?

Yeah, absolutely. Of course the garment industry seems an attractive industry for Americans, because it’s good for us too.

But you don’t really buy it, do you?

It has a lousy track record. I’m not saying it’s impossible, but having garment factories as the centerpiece of the economy is problematic because the entire principle of the garment industry is that it goes where wages are lowest. So every time the Haitian government raises the minimum wage, that presents a problem for the industry and it’s less likely that new jobs will be created.

Money should go to investing in businesses that are producing for the Haitian market. It’s not like these factories are making clothes for Haitians; they are off-shore battery production for other countries. Outside the existing garment factories in Port-au-Prince there are women sitting on the street selling clothes from Panama. As an American I’m wearing my fashionable, quality controlled clothes made in Haiti, while the women who work in that factory have to buy crappy second-hand clothes that have just come off a boat.

What Haiti needs is a functioning, robust society that is full of domestic institutions and is capable of supporting itself.

The Big Truck is also very personal. You discuss your own experience of PTSD, shock, and your struggles as a journalist. How was writing a book different from reporting?

It was very liberating. I’m reminded of a Simpsons episode when Homer is in a space shuttle and slams into an ant farm. The ants realize the glass is broken and start shouting “freedom, terrible freedom!”That’s what it was like – I thought, wow, I can write whatever I want.

The book is personal because I wanted to portray myself accurately, to let readers know who was filtering this experience for them.  We all come with our biases. I wanted to confront head on the fact that I did have some skin in the game, that I did have emotions here, and it was a necessary trade off for being able to tell the type of story that I did. On the afternoon of January 12 I thought I was being moved to Afghanistan.  It just goes to show, never make predictions.

The Big Truck That Went By: How the World Came to Save Haiti and Left Behind a Disaster by Jonathan Katz is published by Palgrave Macmillan.

For the original report go to http://www.newstatesman.com/culture/culture/2013/01/jonathan-katz-there-was-opportunity-do-aid-differently-opportunity-was-lost”

2 thoughts on “Jonathan Katz: “There was an opportunity to do aid differently. That opportunity was lost.””