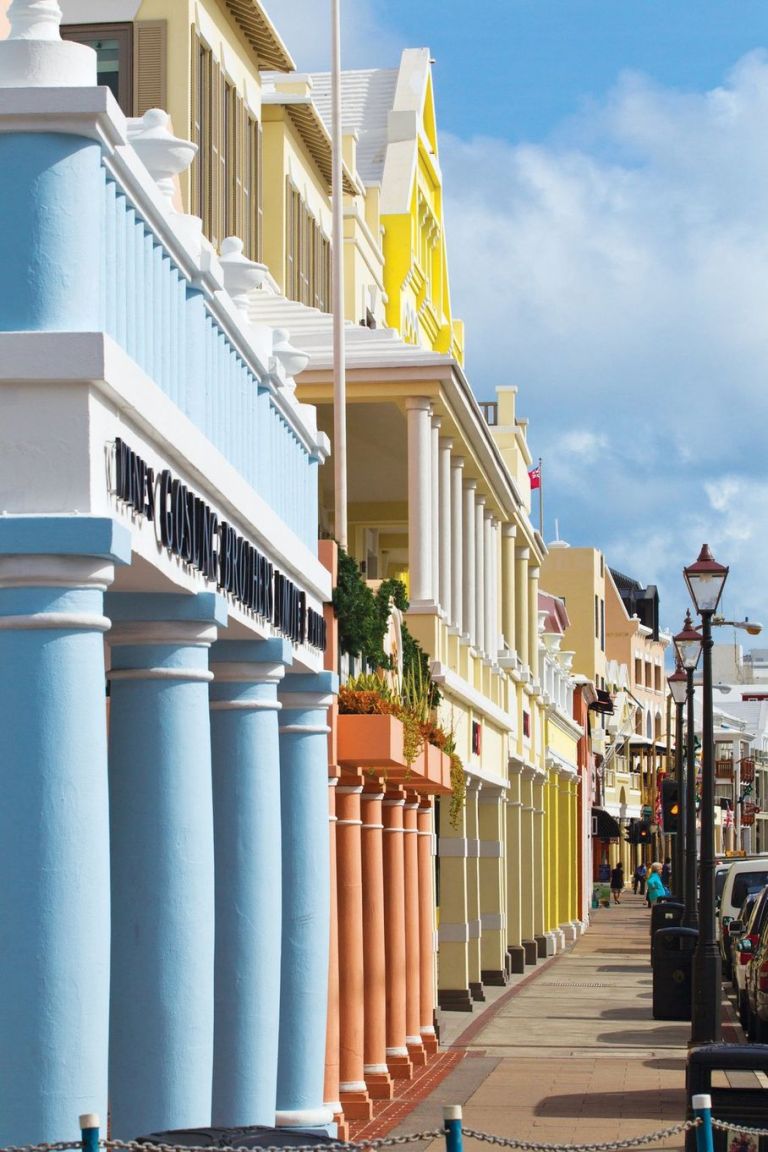 This tiny, isolated archipelago has some quirky sartorial customs, as Cheryl Blackerby reports in this article for the Palm Beach Daily News. [Our thanks to Peter Jordens for bringing this item to our attention.]

It was lunch hour on a weekday in Hamilton, Bermuda’s capital and financial center. I was on my pink scooter in search of food, but I kept looking at men and having near accidents.

Of course, it’s only natural that I would look at guys, but usually I’m not risking life and limb to do it.

From the waist up, the bankers and businessmen wore conservative business attire, black or dark grey jackets, ties and crisp white shirts. From the waist down, let’s just say it looked as if they left the house in a big hurry.

At first and second glance, they appeared to be walking down the street in their boxers.

In Bermuda, women have the rare opportunity to check out gentlemen’s legs in the workplace. Imagine the lady lawyer looking over at her adversary and thinking, “Hmmm … skinny, knobby, pale.”

The Bermuda business attire is a weird mix of Savile Row and Caribbean beach party, although it’s hard to picture a Jamaican businessman in pleated pink shorts.

But, of course, the British Overseas Territory is far from the Caribbean, actually all by itself in the North Atlantic Ocean about 640 miles east of Cape Hatteras, N.C.

So it makes sense this isolated, tiny archipelago would have some quirky sartorial customs. The shorts, appropriate for all Bermuda’s business and formal events including weddings, were inspired by the Royal Navy officers’ shorts worn at the British Navy base, operating here from 1809 to 1995. Trimingham Brothers was the official purveyor of Bermuda shorts until it went out of business after 163 years. 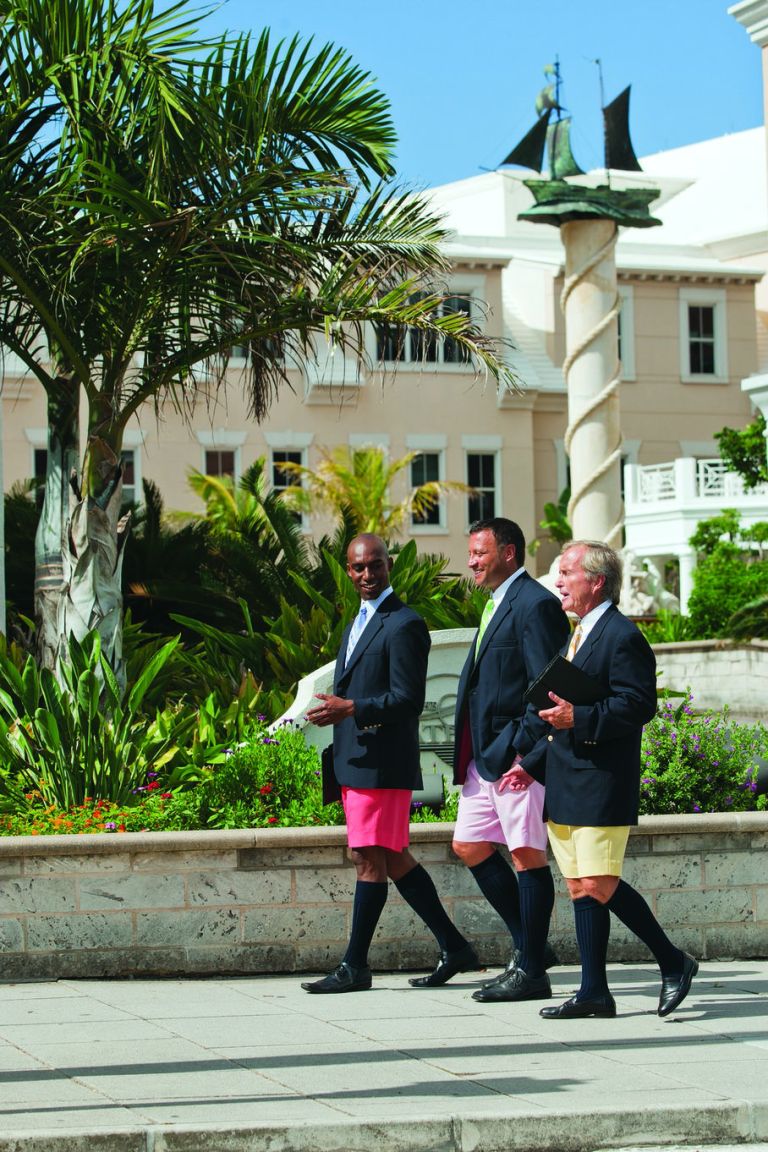 Men in the market for genuine Bermuda shorts should look for linen styles with 3-inch hems that prevent ripples on the thighs. A good starting point is English Sports Shops, which also can satisfy any cravat needs.

But, enough about men and their shorts. It was time for lunch, and I stopped the scooter at Hog Penny pub on Front Street, found a table and ordered a local specialty — panfried rockfish splashed with a sauce made of Bermuda’s own Goslings Black Seal rum.

The pubs such as the Hog Penny are the social centers of the country, which is to be expected where the Union Jack flies overhead and the Queen of England reigns as the titular head of state. Visitors have no trouble finding English comfort food such as fish and chips, shepherd’s pie, beef Wellington, steak-and-kidney pie, and toad-in-the-hole (sausage with Yorkshire pudding).

Billionaires including New York Mayor Michael Bloomberg have turned up at the humble Hog Penny, along with actress Catherine Zeta-Jones, who sang a song with the band. She and her husband, Michael Douglas, have a home here.

My days in Bermuda tend to be organized around food. The first thing in the morning I take off on the scooter along a coastal road to find a breakfast of salt-fish and Johnny cakes. Then I’ll spend the morning at one of the country’s gorgeous pink beaches such as the coves on the South Shore with coral reefs an easy swim away; then go have a lunch of fish chowder or lobster salad.

The afternoons are for exploring the historic town of St. George, a UNESCO World Heritage Site where history runs 400 years deep. I can sit under the candlelit chandeliers and exposed cedar beams of St. Peter’s Church, believed to be the oldest continually used Anglican church in the Western Hemisphere, and walk the hallowed halls of the State House, built in 1622 and the original home of the world’s oldest parliament outside of Britain.

I love the names of the narrow, winding brick lanes that give close-up views of 17th and 18th century houses — Fanny Fox’s Cottage on the Duke of Clarence Street; Stockdale House on the corner of Printer’s Alley and Needle and Thread Lane; and the Tucker House on Water Street. The costumed town crier looks right at home.

Or I can ride my little scooter along the beach to the historic Royal Naval Dockyard, and over to Gibbs Hill Lighthouse, constructed of cast iron in 1844 by the Royal Engineers.

Late in the afternoon, it’s time for tea, scones and rum cakes at the Fairmont Southampton, which has a view of a lovely pink beach, or at its sister hotel, the elegant, pink Fairmont Hamilton Princess, opened in 1885.

At the end of the day, I could head up to Bailey’s Bay to the Swizzle Inn for a huge fish sandwich piled high with spicy slaw. Bermudians are not usually impressed with celebrities unless the famous person is irrepressible TV food show host Rachel Ray, who is fondly remembered at the Swizzle Inn for praising the Portuguese chorizo soup to a room full of patrons.

But the best thing to do in Bermuda is just to bask in its perfection: dazzling pink beaches, gardens of pink frangipani and bougainvillea, and pastel houses. And, of course, you could check out Bermuda’s businessmen in their cool shorts.

For the original report go to http://www.palmbeachdailynews.com/news/news/national/bermuda-in-short-pretty-in-pink/nTtPG

2 thoughts on “Bermuda in short: Pretty in pink.”