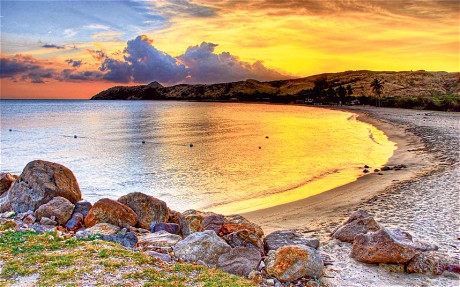 Who do you think you are? Having asked himself the question, Simon Horsford travelled to the island of St Kitts – and was astonished by what he found, as he writes in this article for London’s Telegraph. Follow the link below for additional photos and practical travel information.

This was a journey about ancestry, one that would take me to the Caribbean but produce an extraordinary link across the generations to Bath, the city to which I recently moved.

Until last summer, I had lived all my life in London; my parents were born there too. But over the years I became aware of another side to my family history, one that led to the West Indies. Although I never met my grandfather, a Harley Street surgeon who died in 1953, I knew he had been born in St Kitts, but until I started looking deeper I hadn’t realised how long the family had been in the Caribbean – around 200 years, first in Antigua and then St Kitts. So finally, last year I set out for the Caribbean to trace this particular part of my heritage and discover more about this beautiful, multifaceted island.

Part of the Leeward Islands, the archipelago separating the Caribbean from the Atlantic, St Kitts – or St Christopher, to give it its full title – made its name in the mid-1600s thanks to the sugar industry.

It was the first of the Caribbean islands to be colonised by the British, and not for nothing did it become known as Sugar City – at one point St Kitts and its neighbouring island of Nevis were more valuable to Britain than its American colonies. It was this fact that I presume drew my ancestors to the region from England in the late 1600s, the first being an Isaac Horsford, who is recorded as a Member of the Assembly on Antigua in 1710.

In vibrant if slightly ramshackle Basseterre, the capital of St Kitts, I met up with a knowledgable local genealogist, Hazel Brookes, with whom I would spend the next few days tracing my links to the islands.

First, we wandered around the town, which revealed both its French past (by its name and some of the buildings) and its English one (Georgian and Victorian architecture and street intersections such as the Circus, named after Piccadilly Circus).

It was here that my great grandfather started trading as S L Horsford & Co, a shipping and sugar export company. I was amazed to see how the firm, which my family sold in 1929 and is now a public company, remains a big name in Basseterre, diversifying into insurance, a supermarket, car showroom, building merchant and furniture shop. There was even a Horsford Road.

After lunch in the buzzing Ballyhoo restaurant overlooking the Circus, Hazel and our engaging driver, St Clair Maynard, took me on a tour of the island, filling me in on its history en route. We passed through seven of the island’s nine parishes before arriving at the mighty Brimstone Hill Fortress National Park, built by the British after 1690 and taking its name from the whiff of surrounding sulphur: it was once dubbed the “Gibraltar of the Caribbean”. In one lookout, I found graffiti etched on a wall by a soldier in the Buffs regiment dated 1798.

As in other Caribbean islands, religion is important in St Kitts and we passed dozens of churches that catered for everyone from Protestant, Catholic and Methodist to Seventh Day Adventist, Baptist, Greek Orthodox and Moravian.

We saw black volcanic sand; a statue of Robert Bradshaw (who became the island’s first premier in 1967); plantation houses such as Fairview (dating from the 1700s), now home to picturesque Nirvana restaurant; and the former Wingfield Manor Estate, where we studied ancient petroglyphs.

Wherever we went there were ruins of chimney stacks and windmills, reminders of the old sugar business. The industry fizzled out in 2005 when the EU stopped preferential price agreements between Britain and St Kitts. It seems strange that no sugar is produced at all now – even for locals use. The only people making money from it today are a few Rastafarians who sell handfuls of cane on street corners.

As the go-ahead minister of tourism, Ricky Skerritt, the former manager of the West Indies cricket team, pointed out, what makes money for St Kitts these days is tourism. Cruise ships are a big money-spinner, as is educational tourism; the island also has much to offer the more adventurous traveller as I soon discovered.

I spent one morning fishing with the entertaining Sam Lake. We headed into the Caribbean, four lines out, Bob Marley on the sound system – and hooked a barracuda. That afternoon I met another knowledgable islander, Greg Pereira, who organises plantation and rainforest tours. We visited an old plantation windmill, learned about the work of the abolitionist James Ramsay, and wandered through a Rastafarian hill farm to the lush rainforest at the base of the Central Mountain Range.

But I hadn’t forgotten my main reason for being here. After my sightseeing interlude I caught up with Hazel again. Back in Basseterre’s records office, she and I leafed through dusty records to find the unnerving statistics connected with the slave trade. The heavy tomes list the names of slaves, their ages, where they originated (no records were kept until 1817) and their owners; at one point there were 12 slaves on the island to every white settler. Other records detailed how much a plantation owner would be compensated for each slave after the Abolition of Slavery Act in 1833: it was an uncomfortable moment for me to see that the man claiming £523 9s/6d for 71 slaves was my ancestor, John Horsford.

Hazel produced records showing Isaac Horsford’s son, George, married into the Sawcolt family, plantation owners on Antigua, in 1740. She also uncovered something that astounded me: George’s son, John Horsford, also a plantation owner, was interred in Bath Abbey, in 1795. Until I moved to Bath, no one knew of any family connection with the area. Then it turned out that John’s son Paul, who became chief justice of Antigua, was married in Bath, while his daughter and the two children of his son, Robert Marsh Horsford, chief justice on the island in the 1840s, are also buried there. It was my very own Who do You Think You Are? moment.

And there was more. In 1929 the Horsford family business in St Kitts was taken over by a local family, the Marshalls. In Basseterre we visited the home of Pam Wall, a descendant of the Marshalls, and I noticed she had an oil painting of Majorca, done in the Twenties by my great aunt. My parents have a painting of the exact same scene in their house in London.

The final twist came when Hazel informed me that I have claims to the kingship of Redonda, a tiny, uninhabited island between Nevis and Montserrat. Its first “king” was a Matthew Dowdy Shiell, whose father married a freed slave. Shiell claimed the island in 1865 and my great grandfather married his daughter. Apparently, the title holder has to be a writer.

As I headed to the airport, I reflected on my newly explored heritage. Not only was there a Kittitian addition to my London roots, but my family’s connection with St Kitts mirrors a strong and complicated link between Britain and this easy-going and beguiling Caribbean island. And just think, I might even have a claim to being the king of a Caribbean island.

For the original report go to http://www.telegraph.co.uk/travel/destinations/centralamericaandcaribbean/9796312/St-Kitts-back-to-my-island-roots.html

3 thoughts on “St Kitts: back to my island roots”