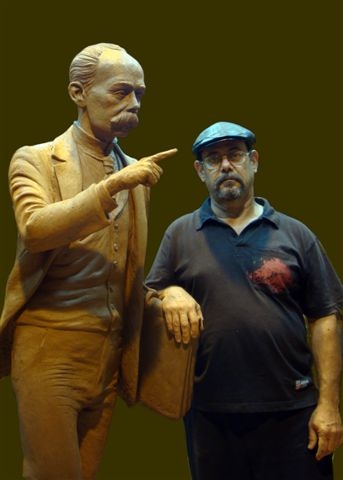 A life-size sculpture of Cuba”s National Hero, Jose Marti, will travel to Berlin, capital of Germany, for the 160th anniversary of the birth of the hero, national television reported.

Cast in fiberglass and polyester resin, the 1.65 meter tall piece was made by the artist Felix Madrigal, commissioned by the German Solidarity Group The Cuban Star. Madrigal told reporters that the work will be located near the Cuban embassy in Germany and will be a meeting place for everyone worldwide who loves Marti, because “even more than serving as a touchstone for Cuba, he is a person who made Cubans great.”

This is the second statue Madrigal has done of the “Maestro.” Madrigal, who hails from the central Cuban province of Sancti Spiritus, made his first Marti statue in the form of a bust on behalf of the Mexican city of Lagos de Moreno.

Many activities will be held in Cuba on the 160th anniversary of the birth of the independence leader, notably the 3rd International Conference for World Equilibrium, scheduled from January 28 to 30.

For the original report go to http://www.plenglish.com/index.php?option=com_content&task=view&id=985951&Itemid=1