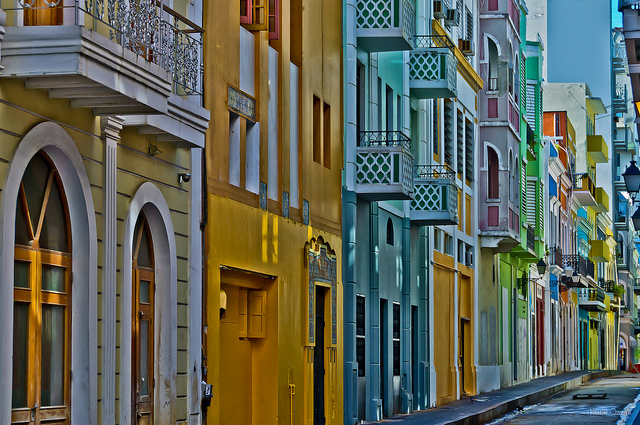 Puerto Rico hopes to be the 51st US state, but for Fran Yeoman it’s the island’s Latin flavour that is the part worth savouring, as he writes in this travel article for London’s Independent.

Shortly before I set off for my first trip to Puerto Rico, a wise old travel hand gave me his verdict: “It’s like Cuba, but everything works.” It sounded promising. But another way of putting it might be: “It’s like Cuba, but in a parallel political universe” or indeed, “Cuba, if Castro were Uncle Sam”. This Caribbean isle, sandwiched between the Virgin Islands and Dominican Republic, has been a “commonwealth” of the US since 1952, as far from Caribbean communism as could be. Indeed, in November last year, Puerto Rico voted in a referendum to become the 51st US state – and while few actually expect this to happen in the foreseeable future, in most senses it is already American soil.

This means SUVs rather than vintage cars lining the streets of the capital San Juan and its historic colonial old town. It also means Hershey’s chocolate in the supermarkets and flight connections that primarily revolve around the US mainland (particularly once British Airways stops its weekly flight from London in March, after just two years of service). And, unlike the atmospherically shabby colonial heart of Havana, San Juan – which mirrors the Cuban capital in its architecture and imposing, centuries-old seafront forts – is almost disappointingly pristine, the colourful paintwork of the colonial buildings is fresh and the ironwork is unrusted.

However, San Juan has an atmosphere all of its own, with an old town that manages to encapsulate the cultural tug-of-war going on across the island. US and Puerto Rican flags fly above the 18th-century San Cristóbal fort, along with the old Spanish naval ensign that first fluttered above its ramparts, while English is an official language along with Spanish – a handy safety net for a rusty speaker of the latter such as myself. Exploring the fort, I was struck by the apparent lack of resentment towards Puerto Rico’s former colonial masters, both on display boards and from my guide. It was as though the island’s past as a strategically vital part of the Spanish empire has become acceptable – even invested with a glimmer of pride – as its present becomes ever more Anglophone.

The island’s food also reflects this duality. On my first day in the island’s capital, I found myself in a dimly lit local restaurant, El Jibarito, tucking into creole chicken, mofongo (a traditional dish made with mashed fried plantain) and shredded roast pork. Two blocks away, salads and hummus are dished out at the fan-cooled St Germain, which wouldn’t feel out of place in Manhattan. By night, in the New York-sounding district of SoFo (“South of Fortaleza Street”), I dined on Latin fusion delights such as dorado with crab salsa in the Parrot Club, and witnessed San Juan’s pitch for the title of gourmet capital of the Caribbean.

Where the Stars and Stripes clearly triumph is in Puerto Rico’s burgeoning luxury tourism industry. The five- and six-star hotels springing up on the island are designed as winter-sun, passport-free boltholes for wealthy Americans. Yes, Juan Jose Cuevas, the deliciously talented, Michelin-starred chef at 1919, who delivered the stand-out meal of my trip, is Puerto Rican. But his restaurant, already serving up scallops with Portobello mushrooms and hazelnut foam in the (soon to be reopened) Condado Vanderbilt Hotel in an upmarket corner of San Juan, has mainland dollars firmly in its sights. The same will no doubt be true of another high-end arrival, the Four Seasons, when it opens in 2014, and the eye-wateringly expensive new Ritz-Carlton Reserve at Dorado Beach, about half an hour east of San Juan. Located on a site once owned by the Rockefeller dynasty, Dorado Beach has 114 rooms that start at just under £1,000 a night (yet sadly does not offer immunity from the sand flies for those taking in the sunset at its beachfront bar). However, when I looked around the day after its glitzy opening party, it was undeniably spectacular, with a gigantic, largely open-air Botanicó spa, stylish clean-lined architecture and acres of green space.

A characterful option for those wanting a high-end stay on the edge of the capital is the two-year-old St Regis Bahia Beach resort. Native coquí frogs – named for the loud noise of the males – chatter in the foliage that lines wooden walkways between rooms and the service is genuinely friendly as well as efficient (the best kind of American import). Moreover, the cocktails, on an island proud to be “home of the piña colada” (the cocktail was reputedly invented by a barman at the Caribe Hilton in San Juan in 1954), are excellent.

Yet despite the temptations of the St Regis’s pool and its complimentary frozen grapes, I wanted to see a little more of Puerto Rico than US imports and glitzy hotels. Fortunately, the island’s diminutive size – it is half the size of Wales – means that getting to the sights is a relatively speedy business. Less than an hour’s drive west from San Juan is El Yunque, the only tropical rainforest within a US territory.

True to its name, the forest came complete with rain – the heavens opened as we drove along Route 191 into the trees – but that didn’t prevent  the view over the canopy to the coast from the top of the Yokahu observation tower from being impressive, or the white ginger flowers our guide picked from smelling absolutely heavenly.

Next stop was Laguna Grande, a bay on the island’s north-east tip near Fajardo that is famed for its bioluminescence. The water is home to millions of micro-organisms that glow blue-green when disturbed. So I took off – in the dark – on a two-hour round trip in a canoe to explore. Sadly, the otherwordly light show wasn’t at its best thanks to a combination of light pollution and a cloudy sky. The purist, I was informed, might want to go the extra miles to Mosquito Bay on the offshore island of Vieques for a more stunning experience, away from the lights and disturbances of the main island. Nevertheless, the paddle along a narrow waterway to the bay, guided only by the blinking LED at the rear of the canoe in front of me, while listening to the sound of fellow tourists ploughing into the banks behind me, was enjoyable enough to make the trip worthwhile.

For daytime natural splendours I headed an hour west out of San Juan, to the Camuy Caves, where a jauntily painted road-train transports visitors down through an overgrown sink hole to the edge of what resembled a concrete bunker. This was erected, my guide cheerily told me, to protect visitors on their way into the cavern after a tourist’s head was smashed a few years ago by a falling rock. Do not be put off by this disconcerting news, however: once down the steps inside the bunker, you are inside a quite spectacular cavern, moodily lit so that ancient stalactites and stalagmites throw shapes, a mixture of ethereal and amusing, on to its walls.

Back in San Juan (via one of the multiple roadside restaurants and kiosks selling authentic creole fare involving lots of rice and beans), locals celebrated Friday pay-day by flocking to the air-conditioned temple to shopping that is Plaza de las Americas. This self-proclaimed largest mall in the Caribbean is a useful, cheap spot for stocking up on US brands. Yet even as they crowd into Macy’s and Victoria’s Secret, Puerto Ricans remain cynical that the superpower that has sent them such consumerist delights, and accepted them as citizens since 1917, will take them fully under its eagle’s wing soon.

For all its Americanness, Puerto Rico is poorer than the mainland US, and the costs involved in granting it statehood for a Washington currently struggling to get its parlous finances in order are, they’re convinced, a price that few on Capitol Hill care to pay. Nor, they argue, are Republicans minded to allow what would be a solidly Democratic addition to the union. So the island looks set to continue in limbo, and many are actually quite content with that.

While some see the current halfway house as disenfranchisement, others see it as the best of both worlds – a means of fusing US and Latin culture; a place on the modern world stage with heritage based on Spanish and indigenous roots; Macy’s with mofongo. Those travellers who like the sound of “Cuba, but where everything works” will probably agree.

For the original report go to http://www.independent.co.uk/travel/americas/american-accent-in-the-caribbean-8437584.html