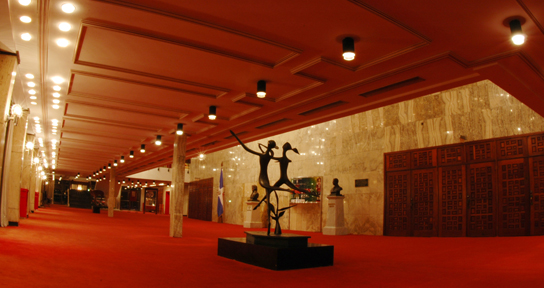 The Dominican Republic’s Eduardo Brito National Theater [Teatro Nacional Eduardo Brito] promises a busy year ahead in the world of entertainment. These are the confirmed events for the theater’s Carlos Piantini auditorium for the first three months of 2013.

Directed by Niní Cáffaro, the Theater has received confirmation for January’s gala premiere of the film Profe por accidente [Accidental Professor], by television presenter Robertico Salcedo. Subsequently, the Ministry of the Armed Forces will host a show to mark the bicentenary of the birth of Father of the Nation Juan Pablo Duarte. Other shows in January include the musical Piratas y Sirenas [Pirates and Mermaids], en una producción de Luis Marcell y de la que no se conocen mayores detalles.

In February, famed conductor Gustavo Dudamel will make his symphonic debut in the Dominican Republic with the Simon Bolivar Symphony [also see previous post, Gustavo Dudamel to Perform at the Dominican Republic’s Teatro National]. This presentation will give way to the National Prize of Literature sponsored the Ministry of Culture and the Corripio Group. Later that month, Puerto Rican salsa singer Gilberto Santa Rosa will return to the theater. Other events include the Víctor Erarte Carnival Gala and the celebration of humorist Carlos Sánchez’s 10 years in show business.

March is also the month for the Symphony Foundation’s Santo Domingo Music Festival, under the baton of maestro Philippe Entremont.

The National Theater is named after well-known Dominican baritone Eduardo Brito (1906-1946), whose real name was Eleuterio Aragonez. He was world renowned for his voice and took to the stage in many countries performing operas and zarzuelas.

For more on the theater, see http://www.teatronacional.com.do/teatro.html