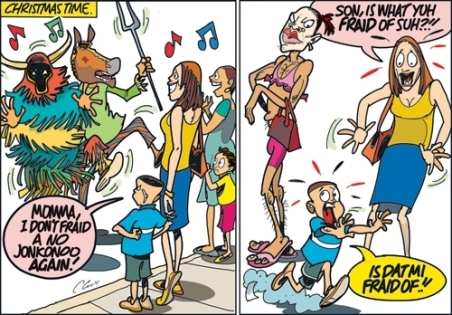 One of the Jamaica’s most widely read papers has published an anti-gay cartoon designed to inflame hate, say LGBT rights advocates—as Dan Littauer reports in this article for The Gay Star News.

The Jamaica Observer, one of the country’s main daily papers, published an anti-gay editorial cartoon on Christmas Day (25 December), designed, according to local gay activists, to inflame hate.

The cartoon is meant, according to Jamaican activists, to foment hate by ridiculing gays and depicting them as a threat to young boys.

The cartoon depicts a young boy undisturbed by men dressed in scary Jonkanoo parade costumes, a Jamaican Christmas custom, yet terrified of a gay stereotyped in an offensive effeminate manner.

Speaking with Gay Star News, Jamaican LGBT rights advocate and lawyer Maurice Tomlinson, criticized the paper saying: ‘This cartoon is the latest in a series by the Observer meant to vilify and further stigmatize gay Jamaicans.

‘This kind of negative imagery makes it harder for gays to be seen as equals in society and deserving of health care and other essential services.

‘In the face of the extremely high level of homophobia in Jamaica (measured at 82% in a 2011 University of the West Indies, Mona study) these actions by the Observer are extremely irresponsible and do not accord with ethical standards for reporting the news.

‘In fact, such cartoons contribute to the virulent hate Jamaicans have towards LGBT citizens.

‘The owner of the newspaper, Butch Stewart, would certainly not condone a caricature that so negatively reflected blacks, Jews, or any other traditionally vulnerable group.

‘In light of the savage attacks we have seen against gay Jamaicans, he should therefore insist that his paper desist from further homophobic imagery that is certain to foment hate against the LGBT community.

‘As an individual with an extensive tourism interest in the island, it would be in his interest to create an environment of social justice and harmony.

‘These cartoons and the very negative attitude the Observer has taken towards gays undermine that goal’.

The Observer has previously been criticized for anti-gay sterotyping of the Jamaican LGBT community.

After many complaints, the paper deleted a similar cartoon published 17 May 2012 which showed a Jamaican musician preparing to beat gays over the head with a hammer, similar to the savage murder of David Kato.

The Jamaica Observer also has a history of depicting the country’s LGBT community in a negative way in its news reporting.

On 8 October 2012 it reported that two drowned boys had been sodomized, despite the government pathologist making no such ruling.

On 14 June 2012 the paper alleged, despite no evidence to support this claim, that two men were savagely murdered in Kingston were victims of a gay lovers quarrel and stereotyping gays as dangerously violent.

The paper also has been condemned for publishing anti-gay Christian articles, for example on 23 April 2012 tit paper published an extended piece by a religious counsellor proposing a ‘gay cure therapy’.

For the original report go to http://www.gaystarnews.com/article/jamaica-paper-publish-anti-gay-hate-cartoons-christmas281212