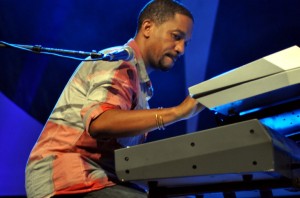 Many thanks to one of our readers (Yves) for pointing out this important event, part of the IloJazz Festival: St. Lucian jazz musician Richard Payne will bring the Wèspé pou Ayiti [Respect for Haiti] Project for a performance on December 14, 2012. The message he will bring with his fellow musicians–Jean Caze, Sony Troupé, and others– is that “the rich Haitian history, culture and music should be appreciated and embraced by all in the Caribbean.” See details below:

In May 2011 at Jazz in the South, three leading Caribbean Jazz musicians, Richard Payne from Saint Lucia, Jean Caze from Haiti and Sonny Troupé from Guadeloupe got together to create the powerful and innovative Wèspé pou Ayiti project. Having since been featured on main-stage at Saint Lucia Jazz in May 2012 and at the Lamentin Jazz Festival in Martinique in June, this project will perform at the IloJazz Festival in Guadeloupe on Friday 14 December.

Richard Payne is the co-founder and band-leader of the regional Caribbean Jazz ensemble Bluemangó. Jean Caze is a composer, music educator and performer who has opened for artistes such as Roy Hargrove and Wynton Marsalis, while Sonny Troupé, an extraordinary drummer and son of one of the emblematic figures of Guadeloupean music, is the leader of the Sonny Troupé Quartet and a member of Trio Laviso. They will be accompanied by Francis John (Saint Lucia) on bass, Miki Télèphe (Martinique) on percussions, and Joël Widmaier (Haiti) on percussions and vocals.

The Wèspé pou Ayiti project actually finds its roots in the Haiti Solidarity Forum that Bluemangó and Labowi Promotions hosted in Saint Lucia in May 2010, to bring attention to the continuing plight of Haitian artistes in the aftermath of the earthquake of January 12, 2010.

The forum was well timed to take place during the week of the Saint Lucia Jazz Festival, in order to take full advantage of the presence of international press and visiting artistes. A primary objective was to put the Haitian crisis back on the agenda and ensure it formed part of the continuing narrative of Saint Lucia Jazz. This is one of the messages that Richard Payne will be bringing later this week to IloJazz, one of the major music festivals in the region. [. . .]

“After this concert in Guadeloupe”, says Richard Payne, “I really hope that we will have the opportunity to present this project in Haiti, but I am also looking forward to taking it to stages and festivals outside of the region. We have fantastic music and musicians in the region, when we get together we can create very original work, we need to promote our talent outside and let others appreciate our work.”

[Photo above by Frederic Thaly.]