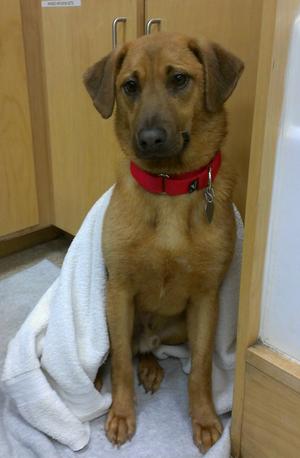 For the staff at the Northeast Animal Shelter in Salem, Christmas came early this year. They got something they had been wishing for for four months – the safe return of a lost dog. Sarah Thomas reports in this article for The Salem Gazette.

“Everyone at the shelter was waiting for Bailey,” said Marianna Massa, adoption counselor for Northeast Animal Shelter. “We are overjoyed we found him.”

The story of Bailey’s remarkable journey begins on the island of Puerto Rico. That’s where Bailey originally comes from. Bailey is what is known as a sato dog – one of the innumerable homeless dogs that can spend their entire lives roaming the tiny island.

“In Puerto Rico, you don’t have to look far for unclaimed dogs,” Massa said. “They’re everywhere. They’re outside of stores and movie theaters, tied to fences or just left to wander the streets. There is no spaying or neutering in Puerto Rico, and little help from the government to alleviate the problem.”

In 1996, Northeast Animal Shelter became the first shelter in the continental U. S. to set up an adoption program for sato dogs. Today, they coordinate with rescuers in Puerto Rico to bring about 40 dogs from the island per month.

“Bailey and two of his female siblings were rescued by a woman we work with in Puerto Rico named Milsa Ramos, a chemotherapy nurse and a nun,” Massa said. “Of the three of them, Bailey was the most protective of his siblings, but he was also the shyest and most wary of people.”

When the three dogs arrived at the shelter, Bailey’s siblings were adopted quickly. Shelter workers decided to pair Bailey with a foster family to get him more used to human company.

“Bailey hadn’t been with his foster family for very long, and hadn’t bonded with them,” Massa said. “On Sept. 17, Bailey’s foster family took him for a walk and he managed to get away.”

Though Massa stressed that the families who foster dogs with the shelter are careful and always concerned for the animals’ welfare, she said that incidents like this do happen from time to time.

“We’re certainly not blaming anybody; when you work with so many dogs and have so many people caring for them, it’s impossible for everything to always go right,” Massa said. “Normally, what happens in situations like this is the dogs will return within a few days, as soon as they get hungry.”

However, the half-wild Bailey had nowhere familiar to return to. Shelter volunteers quickly contacted Granite State Rescue and Recovery, which deployed humane traps and cameras to try to find Bailey.

“Granite State never gives up, and even with long-term runaways like Bailey their recovery rate is still good,” Massa said. “In Bailey’s case, because he came from the streets of Puerto Rico, he was able to fend for himself. He had an advantage.”

But after a few early sightings along Route 1, rescuers began to despair of ever catching another glimpse of Bailey until last week.

“We heard from Melrose Animal Control that a dog that looked a lot like Bailey was roaming a neighborhood there, and when we arrived residents took one look at Bailey’s picture and said, ‘That’s him,’” Massa said. “It turned out he had been surviving because of the generosity and kindheartedness of the people in the neighborhood who had been leaving out food and toys for him. They had gotten him to begin to trust people.”

That trust allowed Massa and Bella Travaglini of Granite State Rescue and Recovery to catch Bailey, luring him into a crate with fried haddock. (For Travaglini’s perspective on the rescue, see the Gazette’s Opinion page.)

“We got him back and everyone was so happy. We had his bed all ready for him and everything,” Massa said. “The amazing thing is how healthy he came back from his ordeal. The only thing we found was that he tested positive for Lyme Disease, which we have treated.”

Currently, Bailey is back in foster care until he is ready to be adopted.

“He’s much better socialized, and learning to live with humans and other dogs,” Massa said. “We’ve already had some people who want to adopt him. That would be a perfect end to the story.”