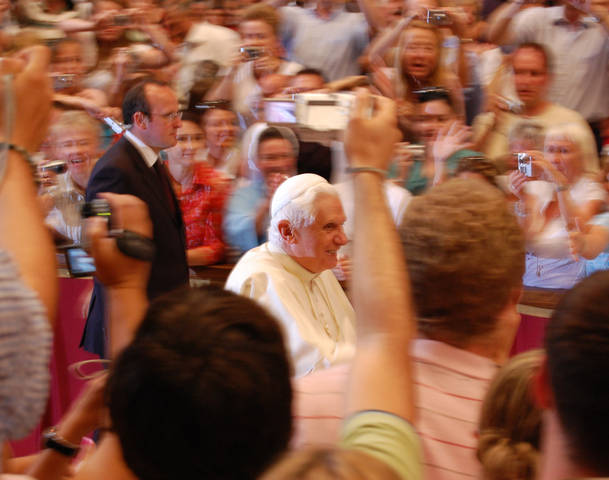 This very funny post by Junior Campbell appeared in allvoices.com. Follow the link below for the original report and a photo gallery.

It may seem an unlikely alliance, but I’m thinking that if Pope Benedict XVI and Rihanna could put their heads (and hearts?) together, they might be able to help each other mount miraculous responses to their most pressing challenges.

According to recent reports, the Pontiff’s robes have been ruffled by the asinine reporting of the media. His Excellency feels misunderstood.

Rihanna surely can relate to that – as her heart-to-heart with Oprah earlier this year made clear. Basically, the Barbadian beauty tried to get across the point that because she likes her butt smacked doesn’t mean that she’s a tough nut.

Perhaps a chat with Oprah – metaphorically unclothing himself, as Rihanna has done – may also do the Pontiff some good.

As Rihanna habitually does (figuratively and literally), Benedict could bare his soul to Oprah – and to viewers of her show around the world.

He could start with revelations of the deep trauma and sense of violation he felt following his butler’s betrayal.

That invasive penetration of His Excellency’s pontifical privacy surely must have hurt!

I imagine Rihanna would recommend at least an hour on Oprah’s public “couch” on that count alone.

There the Pope could cathartically explore and ventilate the rape-like emotional injury he suffered.

Because Benedict XVI is no 16-year old, his latest effort to be relevant and relatable by subscribing to Twitter is that much more admirable.

But sounding off via tweets does not even bear comparison to a session on Oprah’s “couch.”

And if Rihanna slips in during the engagement – well, that would be quite the interview!

Some might say it would be an encounter on the scale of Jesus birth: His first coming, into our sinful world.

Like three wise men – pardon me: three wise persons – the Pope, Rihanna and Oprah could use the interview to clarify His Excellency’s point about the “ox and ass” of Christmas, which he apparently thinks the media has made controversial.

(In my book “The Bible: Beauty and Terror Reconciled” and elsewhere, I take up the issue of how the church’s own centuries-old, “puffing,” perennial “piss poor,” simplistic preaching and similar avoidance of complex issues is primarily responsible for any confusion by the media or general public over what Christianity is about. So here, it’s probably best to just say a word to the wise is enough.)

And Rihanna, ever keen to promote her (and my) beloved island home Barbados, could regale Winfrey and the Pontiff with tales of Barbadian and other Caribbean islands’ peculiar Christmas traditions.

From stories of tightly wrapped gifts and piñatas being pounded, she could then segue to her interest in sadomasochism which, as I have previously suggested, could possibly be explained as a peculiarly Barbadian response to the profound blessings and blights of our African-European cultural contests and tensions.

Barbadians’ processing of psychic or physical conflict and pain can be explained as a legacy of our little, liberty or physical space-scarce island’s impact on its inhabitants: the peculiar psycho-physical constraints of Barbados’ essentially violent African-European cultural contact situation.

Rachel Turner, a British expatriate now living in Barbados – and who I may have met, incidentally, when she was studying at the University of East Anglia here in Norfolk – has suffered a trauma that may be characterized as a microcosm of the violence out of which some elements of the Barbados psyche was born and has been nurtured.

She was raped on the island – one of at least three women who appear to have suffered that misfortune at the hands of the same man, a man who police on the island seem unwilling or unable to bring to justice.

As previously reported here and elsewhere, Turner, along with fellow rape victims Diane Davies and Hilary Heath, have started a campaign to free Derick Crawford, a man they believed is being falsely accused of the crime against them. They see him as a sacrificial lamb they believe the police want to slaughter

The story of their intimate violation and the assault upon Crawford’s freedom and reputation provides a tiny glimpse of the macrocosm of a centuries-long tradition of year-round rape with impunity in Barbados – perpetrated mainly by elected officials who, like Jimmy Savile, are granted special access to the nation’s treasures.

It highlights the stout and stubborn, ox-and-ass-like institutional rapacity that remains entrenched in some aspects of Barbados’ evolving African-European cultural conditions.

Ideally, a couch contact situation involving the Pope, Rihanna and Oprah would end with them all on their knees – saying prayers for all the victims of such violence, in the Caribbean, Europe, America and wherever else they may be found.

For the original report go to http://www.allvoices.com/contributed-news/13541016-pope-benedicts-plight-and-rihannas-blight-the-ox-and-ass-of-christian-and-caribbean-traditions

One thought on “Pope Benedict’s plight, Rihanna’s blight: Ox and ass of Christian and Caribbean traditions”