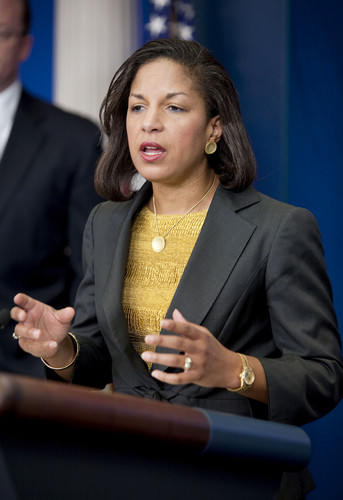 Tony Best (New York Carib News) asks, “What’s in store for the offspring of Caribbean immigrants as U.S. President Barack Obama considers assembling his cabinet or making key judicial and other appointments during his second term in the White House? [. . .] As the President reshapes his team, he says, at least “two prominent public officials of Caribbean ancestry are already being mentioned, one to stay and the other to move up.”

The first is Susan Rice, the U.S. Permanent Representative to the United Nations and a person with Jamaican roots. She is being mentioned as a possible Secretary of State to succeed Hillary Clinton, who has made it clear she plans to leave. What may stand in Rice’s way is opposition from Republicans, who have targeted her over the terrorist attack in Libya where the U.S. Ambassador was killed in Benghazi in September. She was accused by Romney and others of misleading the American people in the initial accounts of what took place in Libya, a report which turned out to be partially inaccurate.

Should Rice be selected for the State Department, she would be the second person of Caribbean ancestry to occupy that position as America’s foreign policy czar. The first was General Colin Powell, the son of Jamaican parents, who served during George Bush’s first term, beginning in 2001. But Rice’s main rival for the job is likely to be Massachusetts Senator John Kerry, who may be passed over because senior officials of the President’s party are worried that if he vacates his Senate seat the door would be open to hard-fought special election fight by the Republicans.

Next is Eric Holder, the highly regarded Attorney-General, who has been given top marks by civil libertarians and other for bringing a record number of civil rights cases in federal courts against individuals and institutions which violated the constitutional rights of people of color. Holder, the son of Barbadian parents, is the first Black to head the Justice Department. Like Rice, he was targeted by the Republicans but he too weathered the political storm stirred up on Capitol Hill because of Justice Department actions in Mexico. Earlier, he was said to be eager to leave the job, but White House officials now expect him to stay on, at least for another two to three years to complete some unfinished business. Holder, a close friend of the President made himself popular among Democrats in Pennsylvania, Florida and other states for successfully challenging attempts by the Republicans to suppress the Black and Hispanic vote.

Should the Bajan -American, who was born and raised in New York leave the Justice Department, the front runner for his position would be Janet Napolitano, the Homeland Security Secretary. During the past four years, Holder went to court and successfully battled Republican inspired restrictive state laws designed to intimidate and deport undocumented immigrants in in Arizona and elsewhere.

The nation’s top court is another area where the child of a West Indian can go to Washington. California’s Attorney-General, Mala Harris, 48, is being mentioned as a possible replacement for Justice Ruth Bader Ginsburg should she retire. Harris, whose father is a Jamaican-American and whose mother is a native-American Indian is being hailed as an innovative crime fighter. And if nominated for a Supreme Court vacancy, she can expect to face a vigorous challenge from the Republicans who would complain about her liberal political record. Court observers and legal luminaries say Harris would make an excellent candidate because of her knowledge of the law and the fact that she would be the first Black woman chosen to sit on the court. [. . .] The conservatives would dread Harris’ presence on the court because she would strengthen its liberal wing, populated by justices Sonia Sotomayor and Elena Kagan, both of whom were nominated by Obama. [. . .]