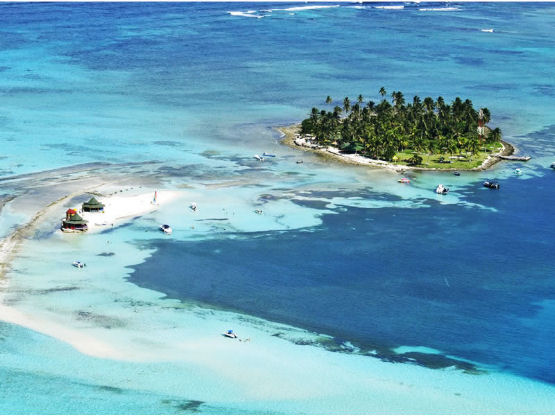 The International Court of Justice ruled Monday that a group of tiny islands in the western Caribbean belongs to Colombia, but also granted Nicaragua control of a large swath of the surrounding sea and seabed that could hold oil reserves, the Associated Press reports.

Based on evidence presented to the judges by lawyers for both nations, “Colombia and not Nicaragua has sovereignty over the islands,” the court’s President Peter Tomka told delegations from both sides.

Despite having its sovereignty claim over the islands rejected, Nicaragua hailed the ruling as a victory.

“Colombia was acting like it was the owner of these islands and like it was owner of all the maritime territory, and the court told them no, that’s not how it is,” Nicaragua’s representative at the court, Carlos Arguello, told the country’s national television channel from The Hague. “We’ve been given very important maritime territory.”

The ruling gave Nicaragua “incredible potential wealth and future exploitation of fisheries and other resources, such as minerals,” he said. “That’s what we were seeking and that’s what resulted.”

Colombian representative Julio Londono Paredes said he was satisfied with the court’s decision to grant his nation sovereignty over the islands and added he would study the rest of the ruling.

Undersea oil exploration concessions for the waters surrounding the islands were approved in 2010 by the Colombian government of then-President Alvaro Uribe. His successor, Juan Manuel Santos, introduced legislation to begin the exploration but, after complaints from environmentalists and local politicians, reversed himself and said he would not allow the exploratory drilling.

The archipelago is home to one of the largest barrier reefs in the Americas, the 100-square-mile (255-square-kilometer) old Providence reef. The rich marine habitat was declared a UNESCO Biosphere Reserve in 2000.

Nicaragua first went to the world court, the United Nations’ highest judicial organ, in 2001 arguing that Colombia had no legal claim to the islands.

The two countries’ dispute over the region began in the late 1960s when Nicaragua granted oil exploration concessions for part of the seabed, but so far no drilling has started.

The court partially rejected that argument in 2007, saying a 1928 treaty between the two countries established that Colombia owned the English-speaking islands of San Andres, Providencia and Santa Catalina.

In Monday’s ruling, the court’s 15 judges said that several other smaller islands and cays in the region also belong to Colombia and set the maritime borders based on Colombia’s ownership of the islands.

The new borders give Colombia control of the waters and seabed immediately surrounding its islands and cays but also give Nicaragua a large horseshoe-shaped area of the sea and seabed stretching from its mainland coast around the Colombian islands.

The provincial governor of San Andres, Auri Guerrero, told The Associated Press by phone that she was disappointed with the ruling, which is final and legally binding.

She said it was important that the court ruled that the waters immediately surrounding two outlying keys, Quitasueno and Serrana, are Colombian territory as they are extremely important for many of the 1,200 small fishermen who live in the archipelago.

But “a boundary has been set where we end up losing territorial water in San Andres province. In the end, we can’t be happy or satisfied with the ruling.”

There are also two commercial fishing companies in the islands, which have 72,000 inhabitants, said Guerrero.

The islands were first settled by Puritans in the early 17th century, and later used as an outpost by pirates. Many inhabitants today are descendants of slaves who speak English as their first language.

Nicaragua had argued that when it ceded the archipelago to Colombia in a 1928 treaty, it did so under duress because Nicaragua was then occupied by U.S. Marines who were battling a leftist insurrection.

The territorial dispute prompted the Colombian military to step up its presence near the archipelago. Nicaragua’s government accused Colombia’s navy of intercepting and capturing Nicaraguan fishing boats off the Nicaraguan coast.