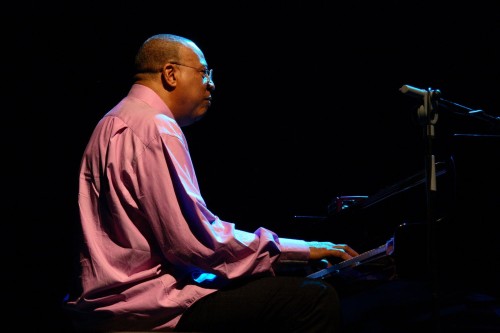 The Times Picayune reports that “Observers of New Orleans culture often describe the town as ‘the northernmost city of the Caribbean.’” Apparently, it will feel a lot more Caribbean on Monday, November 19, when Cuban piano legend Chucho Valdes plays a free concert at the Joy Theater, 1200 Canal Street. The concert, which is sponsored by the New Orleans Jazz and Heritage Foundation, begins with a performance by Alexey Marti, a young Cuban percussionist who is studying in the jazz program at the University of New Orleans. The show begins at 7:00pm; Valdes is expected to start around 9:00pm. The New Orleans newspaper writes:

At age 70, this multiple Grammy winner offers a direct connection to the Cuban tradition. His father, Bebo Valdes, was an influential Cuban bandleader. The elder Valdes also served as his son’s first piano teacher. But the son isn’t a slave to tradition. Valdes first made waves in the United States when he performed here with the band Irakere, an ensemble that fused elements of funk, rock, jazz and Afro-Cuban music. Irakere won a Grammy Award in 1979. The group included such seminal Cuban artists as reedman Paquito D’Rivera and trumpeter Arturo Sandoval. Although both of those players eventually defected to the U.S., Valdes has continued to reside in Cuba while touring internationally.

At the keyboard, Valdes has always displayed a composer’s grasp of musical proportion. He knows how to wring a melody for sweetness, and he has a jazzman’s ear for harmonic variation. Sometimes, Valdes treats his piano as if its keys were 88 carefully tuned drums. He can make you dance and make you think at the same time — a neat trick for any musician.

Monday’s set list is likely to include “New Orleans.” Built around the two-beat rhythm of early jazz, the song is dedicated to the Marsalis Family and appears on Valdes’ 2010 recording ‘Chucho’s Steps,” which won a Latin Grammy.