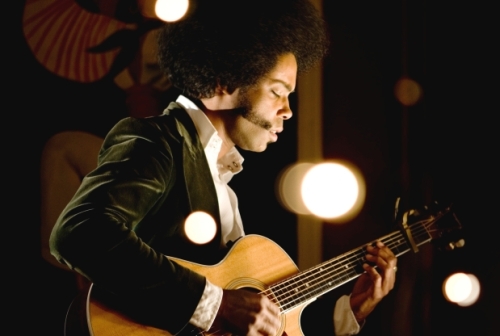 Cuban-Canadian Alex Cuba won a Latin Grammy for co-writing “Toma Mi Vida,” a song performed by Dominican legends Milly Quezada and Juan Luis Guerra. The song was co-written by Yoel Henriquez. His new album Ruido [Noise] is being released in the U.S., France, Germany, Britain, and Canada, with an international tour to follow.

Alex Cuba has learned to blend his Cuban roots with a Canadian approach to songwriting, with the result being new work that straddles both cultures. The Smithers, B.C.-based singer-songwriter — who won Junos for his world music albums (Humo De Tabaco in 2006 and Agua Del Pozo in 2008) — says living in Canada has improved his songwriting skills.

[. . .] Ruido blends a pop-funk sound with his Cuban roots. With it, as he tells CBC’s Alice Hopton, he has taken a step further in his musical journey since moving to Canada for love. The album also includes, for the first time, songs that reflect on the state of the world. “I think this album is going to mark an obvious development in my career as a songwriter, because all of a sudden social issues started visiting me and all of a sudden I started getting these songs,” he said. “This album not only talks about beauty, life, love or Cuba or Canada, it talks about issues that we are facing all over the world.”