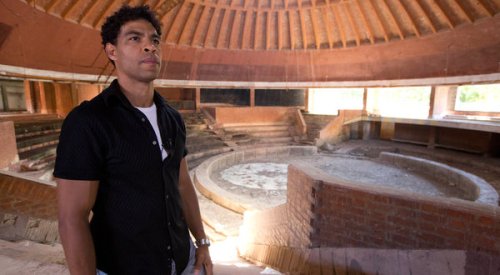 The New York Times (digital version) focuses on Carlos Acosta, the renowned Cuban ballet dancer, whose dream now is to found a dance center in a run-down revolution-era building. Although the story has “the ring of a modern Cuban fairy tale: a handsome ballet star returns to his native land and discovers an abandoned dance school, which he vows to restore to life,” the article states, the project has touched off a bitter squabble with the original architect, thus dividing Cuba’s cultural elite and attracting the attention of architects the world over.

With the island’s socialist model gradually changing shape, the quarrel echoes a broader debate over the legacy of the past 50 years and how Cuba’s future should be defined, and by whom. “This is our national heritage, and it’s going to be lost,” said Mr. Acosta, 39, who is principal guest artist at the Royal Ballet in London but was in Havana this month to dance at the International Ballet Festival. He plans to retire to the island in the next few years and envisions the proposed center as a magnet for students, performers and dance lovers in Cuba and from around the world.  “It’s important for the new Cuban generation to help,” said Mr. Acosta, one of 11 children born to a working-class family in Havana. “By setting an example maybe others will follow.”

Mr. Acosta’s plan for the ballet school’s future, however, has clashed with its unfinished past. The building, designed by the Italian architect Vittorio Garatti, is part of a complex of five National Art Schools commissioned by Fidel Castro in 1961 and built in a frenzy of revolutionary optimism on the lush grounds of a former country club. The architects — Ricardo Porro, a Cuban; Roberto Gottardi, an Italian; and Mr. Garatti — created a serpentine maze of buildings intended to epitomize “the utopian aspirations of the revolution,” according to John A. Loomis, whose book about the schools, “Revolution of Forms,” inspired the 2011 documentary “Unfinished Spaces.” But as Cuba shifted toward pragmatic, Soviet-style architecture, the sensuous structures became viewed as indulgent and elitist. Construction was halted in 1965, leaving the incomplete complex at the mercy of floods, encroaching vegetation, squatters and scavengers. Mr. Porro went into exile in Paris, and Mr. Garatti left Cuba in 1974. Only Mr. Gottardi remained on the island.

Despite their neglect, the buildings became celebrated. The World Monuments Fund, based in New York, put the National Art Schools on its list in 2000 of the 100 most endangered sites, and Cuba submitted the structures in 2003 to Unesco’s tentative list of World Heritage sites.

[. . . ] Mr. Garatti, now 85, has for decades nursed the hope of completing the ballet school, a series of interconnected, domed terra cotta pavilions, derelict and littered, surrounded by grass and areca palms. But he has said he feels sidelined by Mr. Acosta and opposes plans to alter parts of the building’s interior.

Mr. Acosta, for instance, wants to adapt the circular dance “laboratory” so that it can function as a public 530-seat theater. He would turn existing schoolrooms into guest accommodations or studios. Mr. Garatti opposes those moves.  “I have authorship regarding any changes or adaptations,” Mr. Garatti said by telephone from Milan, where he is involved in other off-again-on-again efforts to finish the school. A group of Cuban and international architects rallied behind Mr. Garatti after Foster & Partners, the firm of the British architect Norman Foster, carried out a feasibility study at the ballet school in late 2011 and built a scale model.

[. . .] “This is a colossal ethical issue,” said Belmont Freeman, an architect based in New York who has written about modern Cuban architecture. “It’s unheard-of for an architect to take over the completion of a project — or alterations — when the original architect is still alive and actively involved.”

[. . .] Creating the dance center, which would be run and financed by the Carlos Acosta International Dance Foundation, a charity based in Britain, would cost about $10 million, Mr. Acosta said. The foundation raised about $320,000 at its first event in September and has significant additional pledges, according to Rupert Rohan, the charity’s co-founder.

[. . .] Mr. Coyula said Mr. Acosta and Mr. Garatti should “stop being divas” and work things out by talking, which they have not done in many months.

(A version of this article appeared in print on November 16, 2012, on page A6 of the New York edition with the headline: “An Unfinished Temple for Dance Is a Battleground over Cuba’s Future.”)