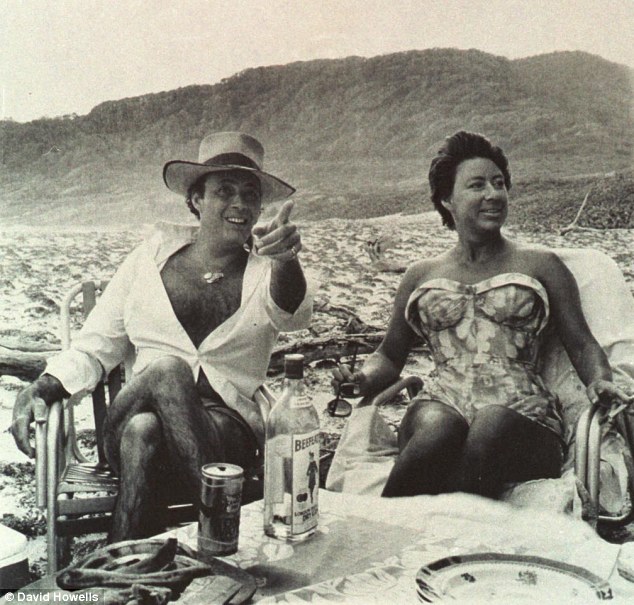 Mustique might not be the party island it once was, but much of Colin Tennant’s vision survives, says his biographer Nicholas Courtney in thie article for London’s Telegraph.

“McRee, McCree, you’ll have us all drowned!” Mrs Maingot screamed at the captain of the The Transport every time a wave hit the side of the boat. It was March 1958 and Colin Tennant, later the third baron Glenconner, was on his way to Mustique in a local schooner with a view to buying the island. The Transport sailed around Mustique as close as McRee dared, while Tennant scanned its seven hills and seven white beaches through an old pair of binoculars. It was on the way back to neighbouring St Vincent that he decided he would indeed buy Mustique and buy it, he did, for a little short of £45,000.

Tennant returned a month later to view his purchase. He set sail from St Vincent full of trepidation as to what he had bought and landed at Walkers Bay with provisions for a week. He then made his way to the Great House, where two sides of a sheep were hanging on the veranda for his lunch.

In the afternoon he was shown around his island with mounting gloom. The whole place was very run down and a history of sharecropping had left the locals disaffected. The roads were terrible, the fencing and stockades had long since perished, and only around 11 of a total 1,385 acres were under cultivation.

Worse were the fierce, feral cattle that roamed the island at night, damaging what little crops and pasture there were. Tennant wondered whether he had made the most terrible mistake and his plans of turning this barren, mosquito-ridden island into a fashionable resort were a far off and expensive dream.

The odds were certainly against him. It was a long and expensive journey to get there, with only a weekly BOAC flight to Barbados, no airport in St Vincent (hence the seaplane) and thence a local schooner. Add to that, catchment was the only source of water and, of course, there was no electricity. When Tennant’s wife, Anne, first visited the island later in the year she told him he was mad, and he would never make a go of any development. He famously replied: “You mark my words, I will make Mustique succeed and become a household name.”

And so he did. The first decade was spent putting the heart back into the land and the people. When the Great House burned down, he built another which was used for family holidays (during the oil crisis it was cheaper to go to Mustique than heat Glen, his estate in the Scottish Borders) and to entertain friends. When the time was right, in 1969, Colin formed the Mustique Company with two others and announced to the world that he was open to business.

His wedding present to Princess Margaret, first of a promontory on the south of Mustique, then a house, brought Mustique to the notice of the world – when she first inspected her new patch of land, the princess moved Colin’s boundary stakes when he wasn’t looking; he then moved them to their original positions. Back and forth they went until a compromise was reached.

Les Jolies Eaux (which is a corruption of Gellizeau Point, named after a former owner) would be a constant source of joy for the princess. One of her first tenants was Mick Jagger, who came with Bianca and their daughter Jade. Princess Margaret gave the house to her son, Viscount Linley. He later sold it to Jim Murray, a sympathetic American, who swept away her rabbit warren of extra bedrooms and completed Oliver Messel’s superb original design, complete with pavilions. Les Jolies Eaux is available for rent (it sleeps a maximum of 10 and costs from $18,000/£11,200 a week).

Although the island is only three miles long and one and a half miles wide, its topography is rich and varied. At the turn of the 19th century, there were seven separate estates of varying sizes, each with its own, very different characteristics.

To the north is Endeavour, fertile, flat lands contained by the Endeavour Hills that grew cotton, then sugar, and where the initial development (including the Cotton House hotel) took place. To the east is Rutland, wild and rocky, leading down to Adelphi and Pasture Bay on the windward shore; the leeward side, Old Plantation, is flat and calm. In the centre of the island, Mount St George (formerly called Polly Camel after the wife of a former owner, Polly Campbell) rises to 500 feet.

In my day, in the pioneer years of the early Seventies, it was all very primitive and certainly belied its glamorous image. But Mustique parties were legion, including two for a pair of Tennant milestone birthday parties. The 50th culminated with the Golden Ball where family and guests shimmered in a recreation of Croesus’ palace on Macaroni Beach, while the week-long extravaganza of the 60th ended with the Peacock Ball.

Soon after this Tennant sold his beautiful house and decamped to St Lucia. Reflecting on his contribution to Mustique he believed that he was in some ways an artist “if it be an art to create a lifestyle”. His founding ideals lasted for some time after his departure, but without the showman himself, his legacy of fun and politesse waned.

Today Mustique is a very different animal, changed out of all recognition, neither for the better, nor the worse. It is just not the same. For a start, the island works. Everything is very efficient and is run by a committee made up of house owners, for the benefit of the house owners, and those who rent their houses, or visit the island.

The Cotton House hotel, with its 17 rooms, boasts a first-rate restaurant, while the Firefly is an excellent five-bedroom hotel. And then there’s Basil’s Bar. The owner, Basil Charles from St Vincent, had been rescued by Tennant from a ditch after a serious motorbike accident and was offered a job on Mustique if he recovered. A year later, in 1971, and minus a kidney from the aforementioned accident, he was employed at the Cotton House as a barman and rose to become the owner of the Raft Restaurant, part of Basil’s Bar, through his sunny demeanour and business acumen. Four decades on he is still there, running his empire beside the port in Britannia Bay.

Most visitors to Mustique take a house, with a choice of 74 villas for rent. There is something for everyone, from a beach cottage to an opulent mansion on a hill. And the best? Taste is subjective, but Sapphire, on the windward coast is lovely, and has the advantage of its own beach, while for the big time there is always Shogun, with nine bedrooms spread over the main house plus two cottages, complete with cinema, speed boat and mini-golf course.

For celebrity groupies, there is only a remote possibility that houses owned by Mick Jagger, Bryan Adams or Tommy Hilfiger’s will be available, but nearby is Clonsilla, the first house built on Mustique and, along with its neighbour, Phibblestown, is still owned by the Guinness family. As Tennant’s first client, Lady Honor Svejdar (who had been married to Chips Channon) chose the best site on the island at Endeavour Point (above the Cotton House) and commissioned Messel to design and furnish this elegant place in what has since been prissily described as “classic colonial” style or ”Caribbean Georgian”.

Messel had a wonderful sense of scale and proportion and, from his years in the West Indies, understood the need for shade and the natural flow of air through a building; he also knew how to frame a view within an arch, in this case north across the sea to Bequia and St Vincent. Clonsilla sleeps 10 in great comfort, with a staff of six. There is a large fresh water pool and a private cove with wonderful swimming.

No one dances to the ringmaster anymore nor are they seduced with a lavish picnic on Macaroni Beach into buying land. Today, residents and guests (or rather their butlers) stake out their territory in the early hours under the shade of the casuarina trees or along the length of the magnificent beach to swim, picnic or even play volleyball (something I’m sure that Tennant would have loathed). Otherwise they take to the tennis courts, the equestrian centre, the dive school or fitness centre. Walking (and jogging) is popular across the two and a bit miles of trails over the island, with frequent “exercise stations” along the way, particularly around the lagoon to the south of the island, where there is a nature reserve.

It is all far removed from Tennant’s day. After he left in the late-Eighties, having wearied of the island and sold his shares in the Mustique Company, he complained that those on Mustique no longer knew how to enjoy themselves. Parties, he felt, were predictable, lacking the spontaneity of the impromptu gatherings that had made it all such fun.

Gone are the days when guests were excluded just because Tennant didn’t like them – he once ostracised some Northerners who complained about the “crocodiles” (harmless geckos) running over the walls. But though many visitors today have never heard of Colin Tennant, without him, it’s certain that Mustique would never have happened, or developed, in the way it did.

For the original report, more photographs and travel information go to http://www.telegraph.co.uk/travel/destinations/centralamericaandcaribbean/9651071/Mustique-The-Caribbean-legacy-of-an-English-lord.html