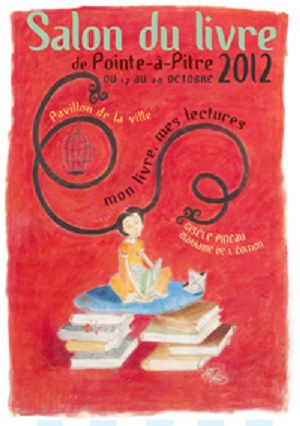 After four years of absence, the Pointe-à-Pitre Book Fair [Salon du Livre de Pointe-à-Pitre] is back at several sites in the city from October 17 to 20, 2012.

More than twenty years ago, the first Salon du Livre de Pointe-à-Pitre held  its first edition with the theme “Bébés Lecteurs” at the Centre for Arts and Culture. This first fair was organized by the Directorate of Libraries and designed by the City of Pointe-à-Pitre, which was managed at the time by Henri Bangou.

From 1994 until 2005, an association formed for the occasion “Livre en l’île,” directed by Brigitte Touzeau, took over this event with the mission to organize, manage, and promote the fair on city’s behalf. During this period, the Salon du Livre took on another dimension, thus becoming the strongest cultural event of the year for the Guadeloupean public as well as students, opeing up the event beyond city limits.

After several years of dormancy due to economic constraints, the Salon has been revived. Anxious to revitalized and sustain this important cultural event, the City of Pointe-à-Pitre signed on for the 2012 return of the book fair under the leadership of its mayor, Jacques Bangou. A “back to basics” approach was recommended, described as follows: “to focus on exchanges, accessibility, proximity, and to benefit from the turnout of all book lovers. These ingredients contributed to the success of the previous sixteen fairs to the point that José Henry is moved as he reminds us that the children of yesterday, now adults, often tell him about how the Salon [which they attended years ago] touched their lives.

Although books may lead us along other paths, one cannot ignore their precious nature, their use and utility. Therefore, the goal of the Salon’s organizers is to place the book at the center of the lives of children and parents.

Excerpts translated and summarized from the original article (in French). For a detailed history of the Salon du Livre, see http://www.gensdelacaraibe.org/index.php?option=com_content&view=article&id=4870:1991-2012-histoire-du-salon-du-livre-de-pointe-a-pitre&catid=591&Itemid=200382