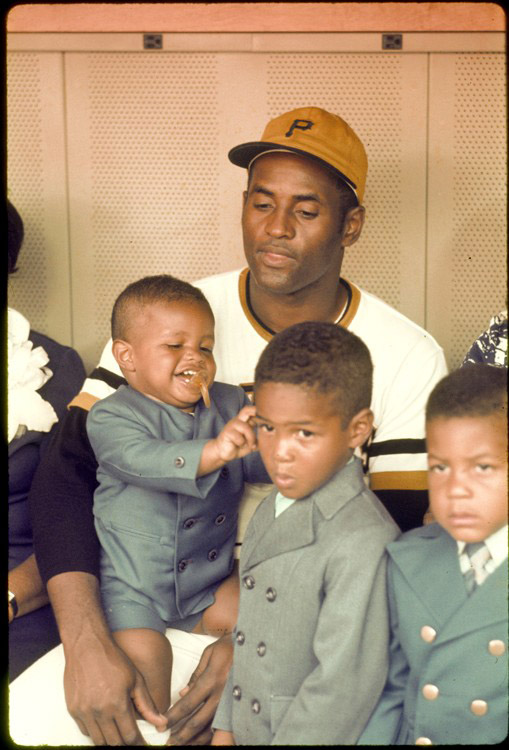 Kristina Puga spoke to Roberto Clemente Jr. for this article for NBC Latino. Follow the link below for the original report and additional photographs.

Roberto Clemente, Puerto Rican baseball player legend, was a right fielder with the Major League Pittsburgh Pirates from 1955 through 1972. He was also the first Hispanic to win a World Series as a starter, to receive an MVP Award, and to a World Series MVP Award. On Sunday, September 30, the late baseball player’s wife, Vera, and sons Roberto Jr., Luis and Enrique will join a sell-out crowd of nearly 40,000 people at PNC Park in Pittsburgh, where there will be a presentation to honor the 40th anniversary of Clemente’s 3,000th, and final career hit, occurring right before the first pitch at the Pirates final home game of the season vs. the Cincinnati Reds.

His oldest son, Roberto Clemente, Jr., remembers his father for much more than just his athletic ability. He says he was also a die-hard humanitarian who left a lasting legacy after his untimely death from a plane crash when he was only 38.   The baseball star was en route on New Year’s Eve to deliver aid to earthquake victims in Nicaragua, when the plane crashed immediately after takeoff. A year after his death, he was elected to the National Baseball Hall of Fame in 1973, becoming the first Latin American to be selected.

“His accomplishments on the field are incredible,” says his son Clemente, Jr. who will be celebrating. “His is the first Latino ever to get to that number of hits in Major League history…but nothing compares to him becoming a hero that people respect, and more importantly a great person.”

He says although he was only 7 when his father passed away, he still remembers him as vividly as if he’d just died yesterday.

“I have so many memories, wow…Everywhere he went, I was there,” says Clemente, Jr. “He was a very special man, as a very young boy, he always wanted to help people…In school, in Puerto Rico, he started a fund to fix a fence at school. He was very caring.”

He says his father was a visionary who always knew he’d play baseball.

“My grandparents wanted him to be an engineer, but he always thought that God put him on this earth to play baseball and to protect people and speak out against injustice,” says Clemente, Jr. “He felt that was his responsibility. He felt that he was representing not only Latinos but minorities.”

Many times before a game, he says his father would get up early to hand deliver autographs to hospitals and surprise the patients. He also says that his dad was nicknamed “Santo Manos” because he taught himself how to be a chiropractor by reading books so he could heal people with hurt necks or backs and save them from surgery.

Now 47, and retired from baseball himself from a paralyzing injury in 1989, Clemente, Jr. resembles his dad in more ways than one.

“The most important thing that he taught me was actually to respect people if you want to be respected,” says Clemente, Jr. “You can’t ask for respect if you don’t respect. If you have an opportunity in life to make a difference on earth, and you don’t, you’re wasting your time on earth and we learned that at a young age.”

As a result, Clemente, Jr., the oldest child of three, is involved in about 30 different boards and non-profits, including St. Jude’s Children’s Research Center, the Make a Wish Foundation and the American Heart Association.

“People ask how can you do all of this?, but the more I learn, the more I get involved. ” says Clemente, Jr. who is currently spending a lot of his time working to provide affordable health coverage for under and uninsured Hispanic Americans with InteractiveMD.

“That’s part of my family, and that’s what I do is help.”

For the original report go to http://nbclatino.com/2012/09/28/roberto-clemente-jr-remembers-his-dad-the-baseball-legend/