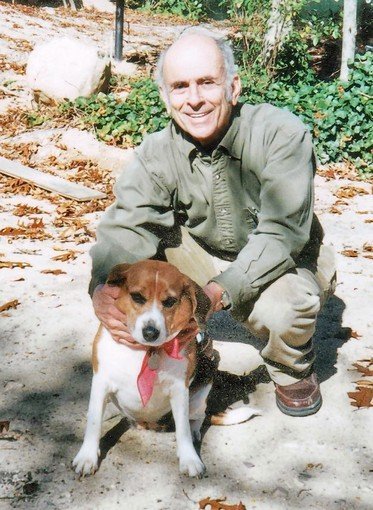 Simpson analyzed the American dream in spare poems about war, infidelity and suburban alienation. His ‘At the End of the Open Road’ won the Pulitzer in 1964, as Elaine Woo reports in this obituary for The Los Angeles Times.

“A poet,” Louis Simpson once wrote, “should wish for enough unhappiness to keep him writing.”

Simpson may not have wished for trouble, but he kept writing for 60 years — spare, powerful poems about war, infidelity, suburban alienation and other modern ailments that brought a Pulitzer Prize and wide recognition as a perceptive, if cynical, analyst of the American dream.

A native Jamaican of Scottish and Russian descent, Simpson died in his sleep Sept. 14 in Stony Brook, N.Y. He was 89 and had Alzheimer’s disease, said his daughter, Anne B. Simpson.

In 1964, when he was an assistant professor of English at UC Berkeley, Simpson won the Pulitzer for “At the End of the Open Road” (1963), a collection of poems that examined the national character with grit and irony.

“He was the exemplary writer of narrative poetry in America,” said poet and critic Mark Jarman of Vanderbilt University. “If you compare him to novelists of his generation, from Saul Bellow through John Updike, he was recording American life as accurately, vividly and, I think, more memorably than many of them.”

Simpson was often described as an heir to Walt Whitman for his ability to tell stories through poetry about ordinary life. But unlike the generally optimistic Whitman, Simpson viewed America through a darker lens shaped by boatloads of unhappiness and doubt.

He was born in Kingston, Jamaica, on March 27, 1923. His Russian mother met his lawyer father when she went to Jamaica as an extra in a movie starring Annette Kellerman, the swimmer and silent-era film star. His mother moved to New York after the couple divorced but Louis stayed in Jamaica with his father, who quickly remarried.

When Louis was 16, his father died and his stepmother booted him and his brother out of the house. He moved to New York to live with his mother and learned that her family was Jewish. He later discovered that his father was part black.

While a student at Columbia University, Simpson was drafted into the Army and served with the 101st Airborne Division in Normandy, Arnhem and the Battle of the Bulge. He landed at Utah Beach in 1944 with bombers firing overhead, ran messages through fields dense with corpses and saw a German soldier’s flesh melt down the side of a burning tank. He nearly lost his feet to frostbite.

When he resumed his studies at Columbia, he had a Bronze Star, two Purple Hearts and psychic wounds that would not heal. He had a mental breakdown in 1946 and spent six months in a psychiatric hospital, where he saw a guard beat a patient to death.

For years afterward the war returned in disturbing flashbacks, some of which found new purpose in poems such as his widely cited “Carentan O Carentan,” a meditation on death:

There is a whistling in the leaves

And it is not the wind,

The twigs are falling from the knives

That cut men to the ground.

Although he had wanted to write novels, he turned to poetry because shorter works were all his ravaged mind could sustain. At Columbia, he finished his bachelor’s degree in 1948 and a master’s in 1950, both in English. He worked as an editor and earned a doctorate in comparative literature from Columbia in 1959.

By then he was on the second of his three marriages, all of which ended in divorce. In addition to his daughter Anne of Pasadena, he is survived by two sons, Matthew, of Acton, Mass., and Anthony of West Hollywood; and two grandchildren.

He taught for eight years at UC Berkeley, leaving in 1967 to join the faculty at State University of New York at Stony Brook and retired from there in 1993.

The postwar decades brought major shifts in his writing, from the formalism of his early years that brought comparisons to English poet W.H. Auden to the free verse and more conversational tone of his later periods. Critics recognized “At the End of the Open Road,” his Pulitzer-winning volume, as a stylistic watershed; Edward Hirsch in the Washington Post called it “one of the tours de force of American poetry in the ’60s.”

For Simpson, the open road led to California. But, as he wrote in the first poem in the collection, “In California,” he did not find paradise there:

Here I am, troubling the dream coast

With my New York face,

Bearing among the realtors

And tennis-players my dark preoccupation.

His disappointment peaked in the poem “Walt Whitman at Bear Mountain,” in which Simpson, playing on Whitman’s celebratory “Song of the Open Road,” lamented the disintegration of the American dream:

“Where are you, Walt?

The Open Road goes to the used-car lot.

Where is the nation you promised?”

Sometimes, his disillusionment was a cause for wry commentary, as in “Sacred Objects”:

I am taking part in a great experiment —

whether writers can live peacefully in the suburbs

and not be bored to death.

As Whitman said, an American muse

installed amid the kitchen ware.

He also wrote a novel, critical studies of poets such as Ezra Pound, T.S. Eliot, Dylan Thomas, Sylvia Plath and Allen Ginsberg, and autobiographical works, including “North of Jamaica” (1972) and “The King My Father’s Wreck” (1995).

Widely anthologized in the 1960s and ’70s, his work was noticeably absent from some later surveys, omissions that Jarman speculated may have had more to do with Simpson’s acerbic personality than the quality of his writing. He did not suffer fools, especially not fellow poets and poetry editors.

“Louis could dress you down in a rather scathing way you never forgot,” observed Jarman, who was stung by Simpson’s criticisms on more than one occasion. “He took poetry seriously. People like that need to be valued, no matter how prickly they are.”

“will be taking precedence

in the arts.” The old man seems

to have thought that people

would be avidly reading

the poetry of Walt Whitman.

I’m sorry, Walt, but the public

these days doesn’t read anything.

That’s all right by me.

Popularity out of the way,

we can get on with art…