Tito Kayak gets small quickly paddling out toward the open ocean.

Up close, Kayak, who was born in Puerto Rico with the name Alberto de Jesus, is a formidable personality. Bare-chested and wearing a thick beard, the 54-year-old has a natural magnetism, and he is quick with a smile and a tale about a near-death experience and draws a crowd easily—as Lou Mattei writes in this article for The Virgin Islands Daily News.

Which is exactly what happened Friday morning when Kayak washed ashore in Frenchman’s Bay.

Within an hour, Kayak had greeted beachgoers from as far away as New Jersey and South Africa, as well as familiar faces from previous kayak trips through the Caribbean.

Of course, having such a personality is probably a prerequisite for a job like Kayak’s, which falls somewhere on the spectrum between endurance athlete and political activist.

Kayak currently is on a trip that began June 21 after he decided to paddle in a dainty-looking yellow kayak from Venezuela to Puerto Rico, then on to Washington, D.C., to raise awareness about Oscar Lopez Rivera, who has been in jail for 31 years on a 70-year sentence for seditious conspiracy against the United States. Lopez, 69, does not have another parole hearing scheduled until 2027. 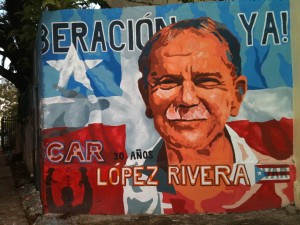 Who is Oscar Lopez Rivera?

Lopez was convicted for his affiliation with the Armed Forces of National Liberation (FALN), a group that engaged in armed struggle for Puerto Rican independence in the 1970s, according to Kayak. FALN also has been loosely affiliated with Los Macheteros, a group that took credit for, among other violent acts, a 1979 attack on the Sabana Seca U.S. Navy base in Puerto Rico, killing two, including a Virgin Islander named Emil White.

Kayak, who has way too much energy for a guy in the middle of a 1,400-mile kayak trip across the ocean, said one of the things that drew him to Lopez’s cause is that Lopez was offered clemency by former U.S. President Bill Clinton in 1999 but turned it down because a handful of “comrades” with whom he was convicted were not offered the same deal. Lopez refused to leave without them and objected to other conditions of the pardon, according to Vicente Panama Alba, one of the coordinators of Kayak’s effort.

Alba said he is backing Kayak’s effort because it represents the anti-colonial, anti-corporate interests of Puerto Rican independence.

“Oscar Lopez Rivera was part of a movement, a movement to which has been attributed military actions in which people have died – absolutely,” Alba said. “But let’s get something clear. The FALN did not invade the U.S. The U.S. invaded Puerto Rico. Let’s make that the operating rule here. It’s not as if there has been a movement to invade the U.S. and have Puerto Rico control the U.S. The U.S. invaded militarily and people have since been imprisoned and killed by the U.S.”

Kayak, for his part, keeps the details of Lopez’s history at arm’s length, though he insisted the end goal is to get President Barack Obama to release Rivera before Lopez’s death. Kayak referred specific questions about Rivera’s past to Alba.

Kayak instead prefers to talk about things like the kayak – both as mode of transportation and in his name – as a symbol that fits his environmental and pacifistic ideals.

Kayak, like many activists, is nothing if not betrothed to the Big Symbol. When a woman from South Africa greeted him on the beach Friday, Kayak was not shy about drawing comparisons to Nelson Mandela. A self-described mystic – “I believe in the mystique of the universe” – Kayak talks eagerly about how he once paddled up to the side of a U.S. Navy warship and, despite being pounded by firehoses from the crew, managed to paint “Bieke (a traditional spelling of Vieques) or death” on the ship’s hull. In 2000, Kayak climbed up on the crown of the Statue of Liberty and unfurled the Puerto Rican and Vieques flags, along with a banner that read, “Paz Para Vieques,” according to St. John author Gerald Singer, who wrote about Kayak as part of his book on Vieques.

Singer also took Kayak under his wing after Kayak’s latest brush with death. After he left Anguilla last week, Kayak’s vessel hit a reef and began taking on water. He had to stop frequently to pump water out, an action he re-created breathlessly Friday, while the wind and waves would push him back, negating whatever progress he had made paddling.

Kayak showed off the epoxy scars on his vessel where the water was getting in. After more than 30 hours of battle alone on the open sea, Kayak made it ashore at Virgin Gorda. He was taken to the hospital on Tortola and treated for hypothermia, exhaustion and dehydration.

Luckily, Kayak travels light. He showed up on St. Thomas en route to Culebra with a GPS system, a handheld radio, a map that was later soaked in water and shredded, a CamelBak filled with water and a Snickers bar.

Kayak said when his passage got rough, he thought most of the time about his father and the priest of his church, both of whom died recently.

He also kept his eye on the big picture.

But the high-octane Kayak paused when asked what it is like to be out in the middle of the ocean on a tiny boat, all alone.

“But I came to know this: I say that I am going to finish this because I have to do this,” he said. “And if something is to happen, I’m going to be in harmony with the universe.”

For the original report go to http://virginislandsdailynews.com/news/puerto-rican-kayaker-political-activist-bound-for-d-c-1.1373631